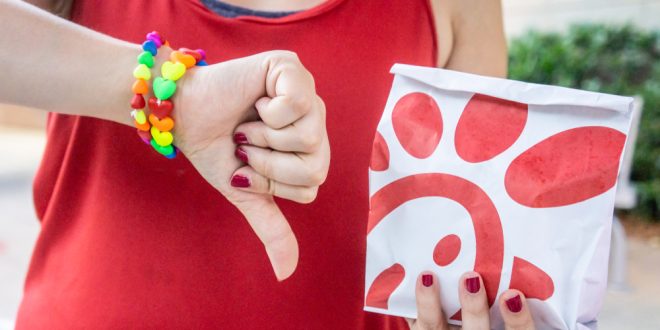 With the extreme scarcity of food in many parts of the world, it’s not surprising that a recent TikTok video enraged a number of people. An employee at the fast-food chicken joint Chick-fil-A, whose identity hasn’t been confirmed, posted a video showing how the fast-food chain throws perfectly good chicken in the trash as the place is about to call the day quits. Apparently, this happens every day.

Many people who have seen the video say that the food could be instead given to the homeless who struggle to find anything to eat.

“What they do every night with the chicken nuggets at Chick-fil-A,” wrote the anonymous employee.

So far, the fast-food chain hasn’t come forward with a comment as the video spread on the social media site like a wildfire. A lot of people say that what the store does with their leftover food is at odds with their Christian values.

So far, the video has been seen over 7.8 million times.

Many took their time to share their thoughts, with one person writing: “The amount of food we throw away and the amount of starving people there are just doesn’t sit right with me.”

“Can confirm,” an employee commented. “We used to throw out SO much chicken…”

“Give them out for free, wtf,” someone added.

One person asked, “Why not give it to the homeless?”

Some of the comments are: “Give them out for free. What the hell.”

“Jesus would not approve.”

“They think God is okay with this?”

“Wait, I thought that at the end of the shift, the employees get to take the leftovers home.”

“They should just let the employees take it home,” one person suggested.

Others, on the other hand, say that getting rid of the food which wasn’t sold that day is what restaurants are simply required to do.

“Chicken that sits too long cannot be given out to the homeless hours later. It will get them sick. It’s not a doughnut,” one person stated.

“It is illegal to give food to the homeless in foodservice. Any food leftover goes to the employees or the trash.”

“I just got my food handlers test. They’re doing it right.”

However, some said that there was no chance for the chicken that was thrown to be cold as Chick-fil-A is quite a busy place and they cook fresh chicken all the time.

“All of you are saying it goes bad. It was made shortly before closing. You guys think they make them in the morning and just keep them hot?”

What do you think of this? Should they give the leftovers to those in need instead of throwing that much food in the trash?

Please SHARE this story with your family and friends on Faceboook.

Previous Rocky Dennis: The True Story of The Boy Who Inspired The Film Mask
Next Gary Dourdan from “CSI” and the obstacles he overcame in life