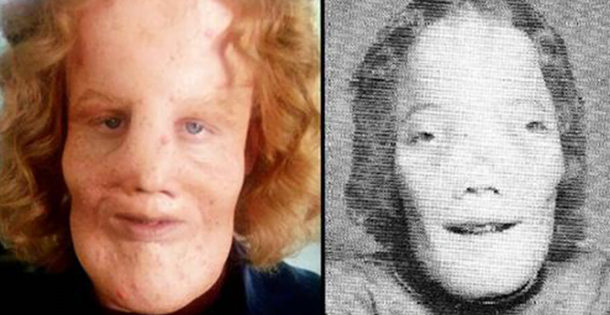 Rocky Dennis: The True Story of The Boy Who Inspired The Film Mask

It is true that there are some stories in life that leave a mark even long after someone is gone. Rusty Dennis from California gave birth to her baby boy on December 4, 1961.

Everything was going okay, until one day she received the shocking news that would change the family’s life forever.

When the little boy, Rocky was three years old, he received a routine tonsillectomy. The scanner revealed some irregularities in his skull.

After the tests were made, it was discovered that he had a very rare condition called craniodiaphyseal dysplasia, which is a sclerotic bone disorder that causes abnormal calcium deposits and deforms the face.

It was told that Rocky wouldn’t live more than his seventh birthday, and he would go blind and deaf.

The mother didn’t allow doctors to talk about death. And we know when you believe something very much, it works.

Rocky was enrolled in a public school and was an excellent student. They said that he had impaired intelligence, but it wasn’t true.

The little boy read all the time and was accepted by his school friends. Rocky had a normal childhood and even worked a little.

When someone was uncomfortable around him, he would just say I can’t change my face, if you feel uncomfortable, you can move.

He graduated High School as an Honors Student and got a gold certificate. Rocky passed away when he was 17 years old.

Just before he died, he apologized to his mother for everything, and for the way he was born. She found the boy dead when she entered his bedroom the following day.

Before his passing, a nurse named Anna Hamilton Phelan met Rocky and was amazed by his story and decided to contact the mother and learn more about him. This led to an award-winning film Mask, which was based on Rocky’s life.

It won an Academy Award for Best Makeup and Best Actress at the Cannes Film Festival.

Rocky never let his problems stand in his way, but worked hard towards happiness and success. He had a meaningful life. May he rest in peace!