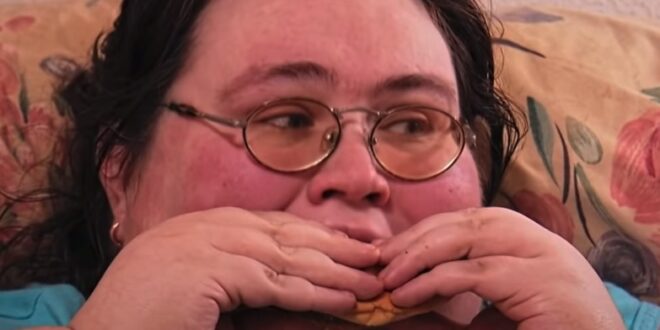 The first step towards overcoming an addiction is acceptance and confession. The biggest issue with addicts is that rather than admitting the problem exists, they’ll do all in their power to justify and continue the behavior.

Just like drugs and alcohol, food can turn into addiction too. Most people who overeat simply can’t control their hunger and crave unhealthy food. This can easily lead to obesity and a number of health issues.

Proof that the life of these people can be a real struggle is the famous TV show My 600-Lb Life.

One of the participants of the show who caught our attention is Jeanne Covey. This woman’s life was far from easy. In fact, it was during her early years that she started building an unhealthy relationship with food. When she was still very young, she used to live with her grandmother who didn’t treat her right. As a form of revenge, Jeanne started steeling her grandma’s cookies, and that’s when she started overeating and gaining weight uncontrollably. At her heaviest, Jeanne weighted 700 pounds.

Living with her mom, dad, and their dogs, Jeanne felt she was a burden to her parents. Her mom was forced to wash her using washcloths as Jeanne couldn’t fit in the shower.

At one point, she decided enough was enough and turned to Dr. Now, the famous doctor from the show who helped save the lives of a number of obese people. The good thing was that she lived in Big Sandy, Texas, just a few hours away from Houston, where Dr. Now’s office is.

If you’ve watched this show, you know that Dr. Now asks from the participants to follow a strict diet and lose some weight before he can perform the gastric bypass surgery during which the patient’s stomach is reduced to the size of a walnut.

Jeanne went to Houston with her mom, but once there, her mom got sick and had to undergo a surgery. With everything that was going on, the two realized they haven’t heard from Jeanne’s dad for some time and got worried for him. They called the police and asked them to check on him, but when they arrived in Jeanne’s family home, they found her father dead. This affected Jeanne’s mental state a great deal and she wasn’t able to continue her journey with Dr. Now. Eventually, she decided to leave the show.

”I talked to my mom and we both decided we’re not going back to Houston,” she said at the six-month check-in on the program. “With my dad gone, we can’t leave the dogs alone and I can’t go by myself. So I’m just not in a place to do Dr. Now’s program. I know I have to lose weight and I don’t have a lot of time, but I don’t know what to do about it right now.”

Her destiny was one of the reasons why people became very interested in her life. Many believed that Jeanne would gain even more weight because of the heartbreak she suffered, but she proved them wrong.

In August 2020, this determined young woman wrote on her Facebook page, “Im down to 388lbs. So you don’t need to private message asking my weight.. here it is.. I’m doing great, going out more.”

Apparently, she worked hard for a fresh start, found a boyfriend and moved places.

In December last year, Jeanne posted an update. “Hope everyone is having a wonderful beginning of December… Not going into all the details But for Christmas Ill be sharing some new pictures of me and my new Beau… not giving too much info as I’d like everyone to respect his privacy but sharing some good news with everyone who has been in my corner,” she wrote.

A month ago, she posted another update and made her fans really happy. “This was our last day in Texas … We are now in Arkansas and the dogs love it .. Mom and I are doing well as well as are the fur babies … Now to start unpacking…”

We can’t even tell you how happy we are for Jeanne. She looks incredible. We wish her only the best in the years to come.

Previous Mom abandons 1 year old baby in a derelict house, 10 years later, she returns and discovers the unthinkable
Next Couple adopts their neighbor’s 3 kids after she passes and community steps up in a big way