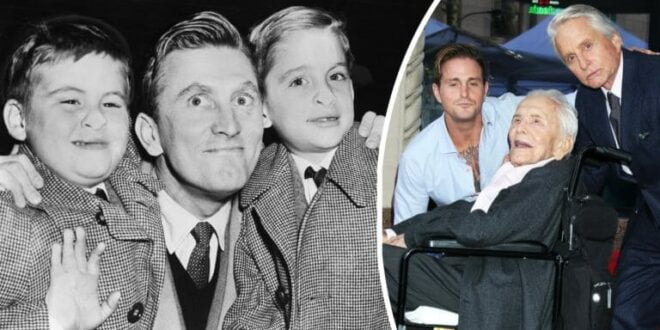 Kirk Douglas’ childhood made him a charitable man, but none of his kids got a penny from his fortune

Kirk Douglas was one of the most legendary actors of the 20th century. The New York native came from a rough background, but even though others wanted to push him down, he never caved and pursued his career in his own way.

Douglas passed away in February 2020, at age 103, but his legacy will live forever. At the same time, as he became a well-respected actor, working alongside some of the greatest, he also created a lovely family, raising children and giving back to the ones that always had helped him.

When Kirk Douglas passed away, he had made himself a fortune. However, his children – including actor Michael Douglas – reportedly didn’t receive one single dollar. Why? Here is all you need to know about the legendary Kirk Douglas!

Kirk Douglas was born Issur Danielovitch on December 9, 1916, in Amsterdam, New York. Later, he would change his name to Kirk Douglas because he thought it would be good for his acting career.

The only son in a large family of seven children, his parents were Russian Jewish immigrants, and Douglas’s childhood was challenging. He described his family as the poorest family on “a street of poor families” and slept on a “shabby living-room sofa” in an unheated clapboard house.

Kirk Douglas’ father, Hershel, was prohibited from working at the local mills because he was Jewish, and instead, he became a junk dealer.

“Even on Eagle Street, in the poorest section of town, where all the families were struggling, the ragman was on the lowest rung on the ladder,” Mr. Douglas wrote in his best-selling autobiography. “And I was the ragman’s son.”

Sometimes, the family didn’t even have food, making Douglas steal food from his neighbors or even produce stands.

As he described in an interview with the Hollywood Reporter, growing up in Amsterdam, New York meant “living in the East End, the opposite side of town from the rich people on Market Hill. It meant living at 46 Eagle Street, a run-down, two-story, gray clapboard house, the last house at the bottom of a sloping street, next to the factories, the railroad tracks, and the Mohawk River.”

Kirk Douglas’ was often teased because he was Jewish and even attacked by local gangs. Still, it didn’t break Douglas one bit, who instead worked hard to help his family and earn himself a better life.

Found his passion for drama in high school

He estimated he had around 40 different jobs – from newspaper boy to dishwasher.

“I also was a hard worker. I’d invent jobs, like selling soda and candy to workers at the mill at the end of our street. Amsterdam was one of the largest mill towns in the country. There were dozens of factories but no jobs for Jews.”

Kirk Douglas attended the Wilbur Lynch High School – now Amsterdam High School – where he first became interested in drama. He was encouraged by his English teacher Louise Livingston, participated in various kinds of drama activities, and was introduced to the world of poetry.

“I would have been run out of town if I had ever admitted to liking poetry or said out loud, ‘I want to be a great actor.’ Because of her, I sent away for college and drama school catalogs and saved every penny so I could get there,” Douglas reminisced.

“Mrs. Livingston was cool and detached when she walked into the classroom. She never raised her well-modulated voice. Emotion crept in only when she read poetry. She thought I was wonderful. She encouraged me and kept me after school. What a sparkle came into her eyes as she read poem after poem with me sitting by her side.” 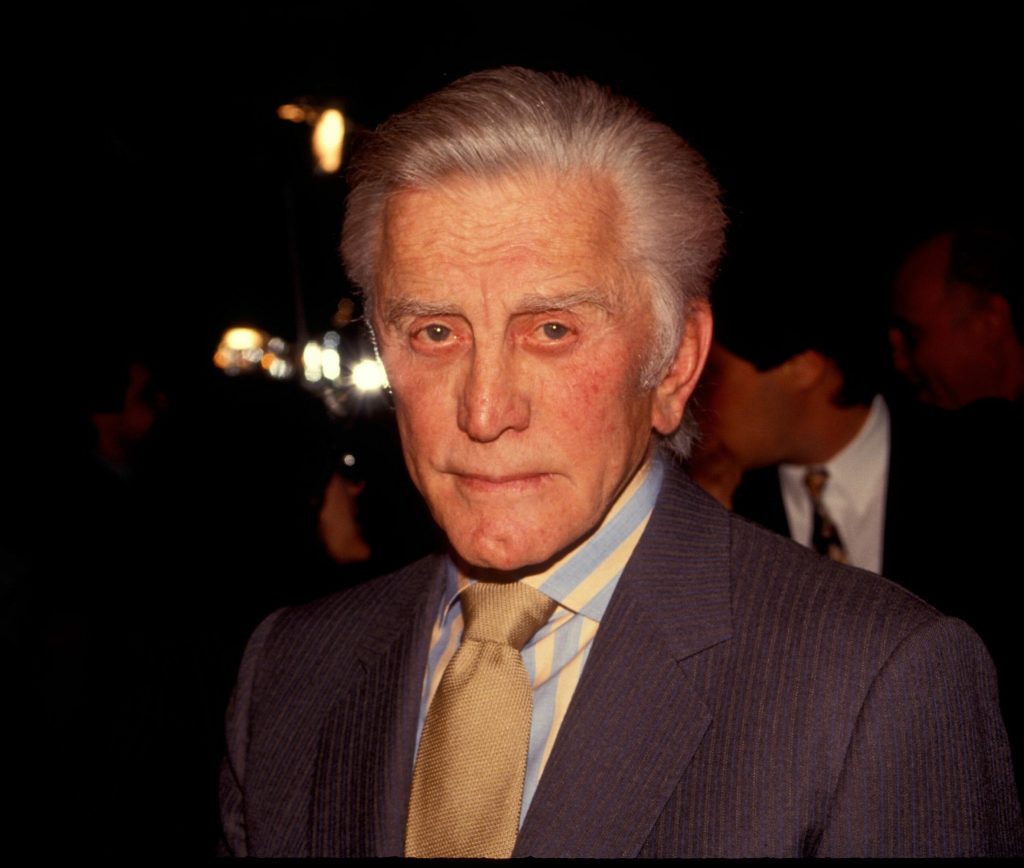 Even though Kirk Douglas tried saving every penny for college, the money wasn’t enough for his tuition. So he decided to take a leap of faith and hitchhiked 200 miles to St. Lawrence University in Canton, New York.

With him, Douglas brought all his high school awards, transcripts, poems, and a recommendation letter from his teacher, Mrs. Livingston. He got a meeting with the head of the faculty – and convinced him to get a scholarship.

Kirk spent his summers working as an actor at the Tamarack Playhouse on Lake Pleasant. And it was there he changed his name to Kirk Douglas.

¨ “One day, a few of my friends insisted I needed a more American name. Someone suggested Douglas,” he recalled. “My new first name took longer. Someone finally said, Kirk. My new name sounded masculine and strong.”

Douglas perfected his craft as an actor, and in 1941, he earned his first Broadway role in the musical Spring Again. He continued to get more roles on Broadway, but before his big breakthrough, world events changed everything.

World War II arrived, and Kirk Douglas decided to sign up right away. He said he felt “a wave of patriotism and a wave of Jewishness” and decided to enlist as an Army pilot, but ended up working as a communication officer on a submarine. 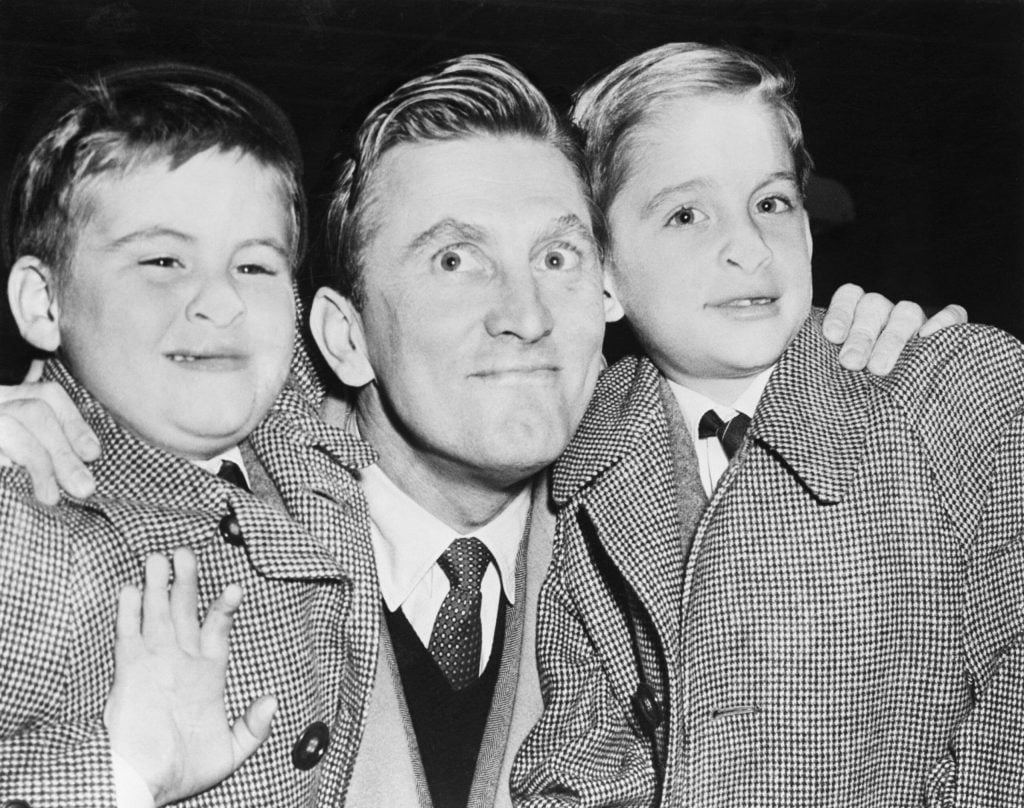 However, in 1943, an accident on one of the submarines left Kirk Douglas hospitalized with injuries. After being diagnosed with amoebic dysentery, he was discharged from the Navy as a junior grade lieutenant.

He went back to the US and continued to pursue his career in show business. However, because of an illness, his singing voice was destroyed, and it could’ve ended Kirk Douglas’ career. But as we all know, it didn’t. At one of his shows, a Hollywood producer named Hal Willis saw him and cast him in his 1946 film The Strange Loves of Martha Ivers.

After that, Kirk Douglas never looked back – and became a Hollywood legend. He got his big breakthrough three years later as he starred as a boxer Midge Kelly in the 1949 film Boxer. It earned him his first Academy Award nomination for Best Actor in a Leading Role.

Douglas earned two more Academy Award nominations – for The Bad and the Beautiful in 1952 and Lust for Life in 1956 – but he never won a competitive Oscar for his performances. However, in 1996, he was awarded an honorary Oscar for “50 years as a creative and moral force in the motion picture community.”

By the 1950s, Kirk Douglas had already been married once. Between 1943 and 1951, he was married to actress and model Diana Dill, and they welcomed children Joel and Michael Douglas.

Just three years later, the then well-respected actor was to meet the love of his life, to whom he stayed married to for the rest of his life.

When filming in Paris, Kirk met Anne Buydens for the first time. She assisted with the press, and Douglas became very interested in her. However, his attempts to try and impress her weren’t successful at first.

“I had been a big movie star with two Oscar nominations by the time I met Anne, and I believed that any woman would be flattered if I asked her out,” he recalled. “Anne was the one who turned me down,” Kirk Douglas recalled.

It turned out that Anne had her reasons.

“Of course, he was charming and sexy, but I had seen too many young women in Paris fall in love with American movie stars who went home to their lives and wives when their pictures wrapped,” she said. “I certainly didn’t want to be another location romance casualty. I had survived war in occupied Paris and knew instinctively how to protect myself from dangerous situations.”

In the end, Kirk found a way to get close to Anne. They started working together as he convinced her to do his publicity for his 1953 film Act of Love. The two fell in love, and in 1954, the couple tied the knot. They had two children in Peter and Eric Douglas.

All his sons went into the film business, with Michael Douglas becoming the most successful. The two-time Academy Award-winning actor starred in classics such as Wall Street, for which he won an Oscar playing Gordon Gecko, Falling Down, and Wonder Boys. 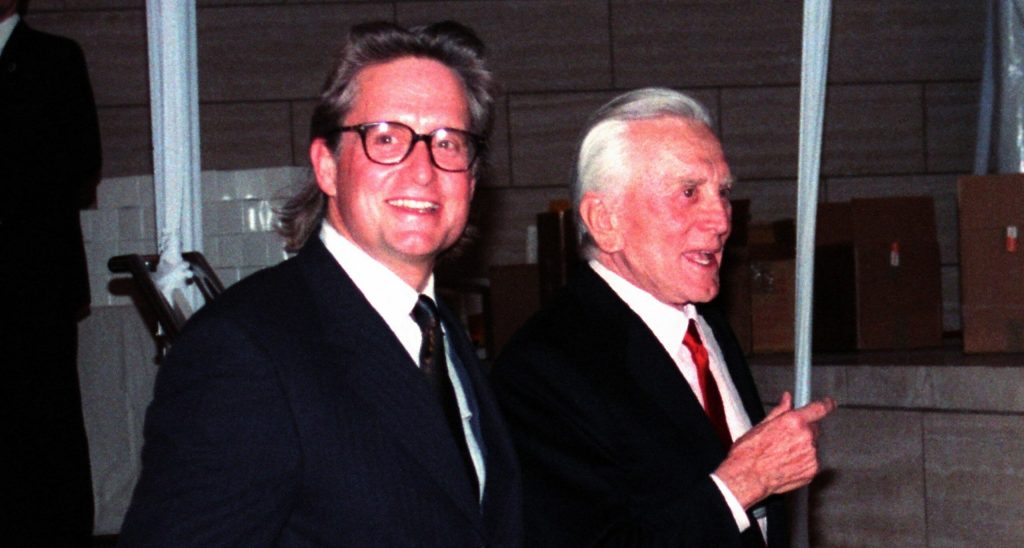 However, the relationship between son and father wasn’t always at its best. For example, when speaking with the Associated Press, Douglas refused to call his father “dad.”

“In those key years, when Kirk was doing five movies a year… Kirk was all-consumed, was overworked. Probably like myself at a certain time in my life.”

In 1975, Michael and Kirk Douglas’ rift became even more extensive. At the time, Kirk owned the rights to the film One Flew Over the Cuckoo’s Nest, and his son convinced him to sell the rights.

However, once it was set to start filming, Michael – now the producer – didn’t cast his father in the lead role of Randle McMurphy, even though he had played the part on Broadway.

“So Michael asked me if he could try to produce it, and I said: ‘Sure!’ Next thing I know, he has a director lined up, and it’s all go. So I said to him: ‘Great! When do we start rehearsing?’” Kirk Douglas recalled in an interview with The Guardian.

“Not you, Dad,” Michael replied, devastatingly. “You’re too old.”

“I couldn’t believe it!” Douglas added. “So I said: ‘Who’s playing my part? Jack Nicholson? Never heard of him. Well, at least it will be a flop.”

Their relationship didn’t take a turn for the better as the film went on to sweep at the Academy Awards: as producer Michael Douglas took home an Oscar for Best Picture, and Jack Nicholson won Best Actor for his performance.

Kirk Douglas – cause of death & net worth

Kirk Douglas was the title star of the 1960 film Spartacus, which became one of his true classics. The film won four Academy Awards, and Kirk went straight to the top of the Hollywood ladder despite not winning an Oscar himself.

Over the years, Douglas starred in more than 90 Hollywood films. His last ever role was in 2008, when he appeared in the television film Empire State Building Murders.

Kirk Douglas was a true movie star from Hollywood’s golden age. Unfortunately, he passed away on February 5, 2020, at age 103.

At the time of his death, Kirk Douglas had an estimated fortune of $61 million. However, his son Michael Douglas and the rest of his family didn’t get a single penny, as he left a lifetime of donations to several causes.

According to The Mirror, Douglas distributed $50 million to St. Lawrence University, where he attended in his early life. The Sinai Temple of Westwood, the Kirk Douglas Theatre, and the Children’s Hospital Los Angeles also received a big chunk of the money.

Both Kirk and Anne have previously donated to the different institutions above through the Douglas Foundation. According to its website, the foundation’s purpose is “to help those who cannot otherwise help themselves.”

As reported by Page Six, Michael Douglas won’t inherit any money from his father. But, at the same time, he won’t be needing it, as he’s said to be worth around $300 million.

Despite their previous rifts, Michael praised his father’s loving and charitable personality at the time of his passing.

“Kirk’s life was well-lived, and he leaves a legacy in film that will endure for generations to come and a history as a renowned philanthropist who worked to aid the public and bring peace to the planet,” Michael Douglas said in a statement.

Kirk Douglas overcame a poor and tough childhood and created his own path towards becoming a movie star of Hollywood’s golden age. May he rest in peace.