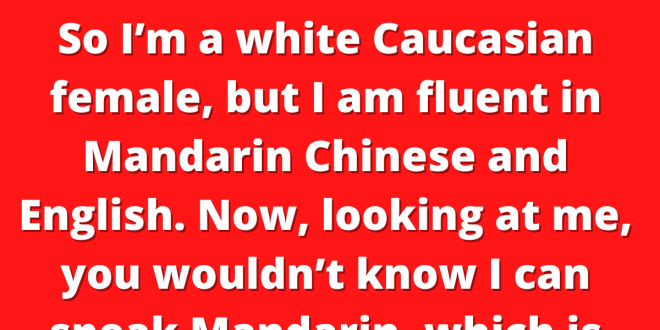 People are often too quick to judge others based on appearance. Just because someone doesn’t LOOK like they speak a certain language, does not mean that they aren’t actually fluent. Be careful what you say, no matter what language you’re speaking.

So I’m a white Caucasian female, but I am fluent in Mandarin Chinese and English. Now, looking at me, you wouldn’t know I can speak Mandarin, which is why I find it absolutely hysterical to mess with people. Especially when they come through my line at work speaking Chinese, and I understand every word they’re saying. My coworkers find it especially hysterical.

Okay, so the other day this Chinese couple came through my line, and I asked them (in English) all of the usual questions about bags and if they had their rewards cards, all of that fun stuff.

Anyway, I started ringing up their stuff, and the wife said to her husband, “Tell her not to bruise the bananas,” in Chinese and I didn’t say anything. Then the wife said, “Tell the stupid girl to go faster,” in Mandarin. I smiled at her and pretended like I had no idea what she was saying.

She kept commenting on how my hair was like a boy’s (I have short hair, it’s honestly not even that short) and how her grandfather would have gone faster than I was going, all of this in chinese.

And then she said, “Make sure she doesn’t forget the water,” in Chinese.

I replied in English, “I won’t forget the water.”

And I watched with enjoyment as a look of sheer terror spread across her face, as she realized I understood everything she had said before. She just stood there with her mouth open and her husband said (in Chinese), “This is why you shouldn’t trash talk employees while they’re standing right in front of you!”

They paid, then the husband apologized and left. After they walked out the door, my manager and coworker and I were laughing so hard.

Even though being a cashier sucks, it sometimes makes my day a little brighter when something like that happens.