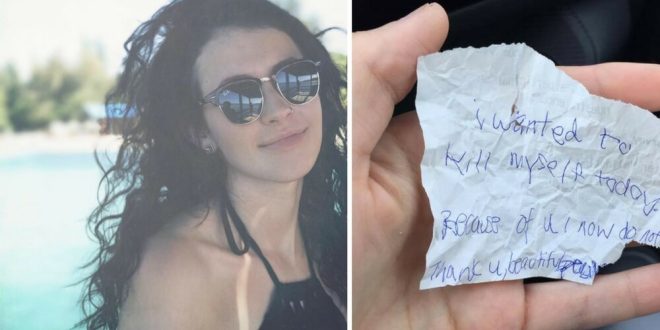 She buys homeless man meal & sits with him. He hands her crumpled note before leaving

Recently, I’ve stumbled upon a social experiment in which a girl was nicely dressed and left alone by the sidewalk. Most of the passersby who saw her took their time to stop and ask her where her parents were and whether she needed help. That same girl was now dressed in worn and dirty clothes and left standing at the same place. A lot of people passed by her, but non seemed to notice her. And those who did, only stared with resentment.

This is the sad reality of today. It makes me wonder when did this world become a home of selfish humans who only judge others based on their looks. Or, how come that the life of a rich person is worthier than that of the poor?

Thankfully, there comes someone along the way who shows us that not everyone lost the ability to empathize with the less fortunate, and that gives us hopes that not everything is lost.

Casey Fischer was planning to grab some coffee at Dunkin’ Donuts during her break from classes when she saw a homeless man on the side of the road picking up change. He then entered the place in hopes of buying something to eat.

When Fisher got closer she could see the change in the man’s hand barely made $1. She then offered to pay for his coffee and a bagel and invited him to join her table.

The man introduced himself as Chris and shared with Fischer how he was very often treated badly only because he was homeless.

He confessed how he abused drugs and that turned him into the man he hated. What he really wanted in life was to be the person his late mother would be proud of. But somehow failed in reaching so.

As it was time for Fischer to get back to class, she told Chris she was glad to meet him and that she had to go. But then, the man told her to wait a minute, took a crumpled up piece of paper, wrote something on it, and handed it to his new acquaintance.

Fischer opened the note and she felt overwhelmed. She could never imagine that what she did could mean so much to the homeless man. For him, this meeting was way more than just a chat over coffee and a bagel. It changed something in him.

“I wanted to kill myself today,” the note read. “…because of u I now do not. Thank u, beautiful person.”

We would like to thank this lovely girl too. You are the change that this world needs in order to go round.

Please share this story with your friends and family