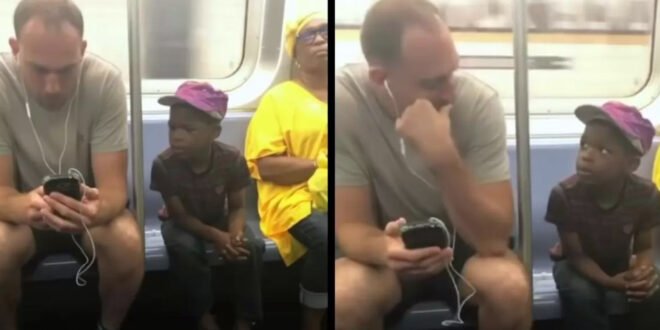 It’s the small things in life that make it whole and worth living, and as soon as we figure that out, we’ll learn true happiness.

This story from the New York subway makes us reconsider the way we treat all those people that we come across every single day, and ponder how our behavior towards someone can affect their day, or even life.

A man was casually sitting on the subway, listening to some music, and playing on his phone, unaware that his deed will touch so many people.

Riding the subway can be tiring, and it’s usually very crowded, so the guy was just sitting there, playing a game on his phone, which is pretty much what most commuters do.

However, his game caught the eye of the little boy sitting right next to him. We know how kids these days are overly addicted to technology and won’t let their parents’ smartphones out of hand, and this kid wasn’t any different. He was really interested to see how the guy’s game was proceeding, even giving him some advice on the next moves.

At first, however, the guy was so into his game that he didn’t even notice those sparkling eyes staring at his phone’s screen. But once he did, something really touching happened.

When the little boy realized he was caught staring at the stranger’s phone, he appeared a bit nervous.

He wasn’t really sure whether his “rude” behavior could get him into trouble, but he is just a kid and he simply couldn’t contain his innocent curiosity.

The guy continued playing as the boy continued looking at his device. Another passenger named Kia Tatiyana Davis, who was staying opposite these two, found the whole thing fun and sort of cute and decided to record it. But, she didn’t really expect the move the guy did next.

The guy takes the earbuds off the phone and gives it to the boy so that he could play the game himself.

The boy is both happy and surprised. The video of the kind act had been shared online and viewed by a great number of people who praised the guy for his sweet act and agreed that it made their day.

One person wrote: “What a sweet kid! He’s so curious but look at his posture. So much self-control for just a little guy! D’awww 😊👏👏 And way to go to the man who gave him a chance to play too. Very cool!”

Others added: “What a sweet hearted man… And that child…my heartfelt something really good watching this. My day was a real bummer until I watched this.”

We are positive that this act meant the world for the boy. And while many people will consider young kids looking at their phones annoying, that didn’t bother this man at all.

He didn’t do it because he wanted to impress anyone.

The guy had no idea someone was video-recording his interaction with his new pal.

An act of kindness always goes a long way.

We are sure there are other people out there who’d do the same thing, but unfortunately not every good deed is caught on tape.

Luckily, those that are, serve good example to each of us about how things should be done.

At the end of the day, life is all about making others happy.

We hope this video will inspire each of us to do good to others whenever possible.

The guy not only made the little boy’s ride in the subway more fun, but he taught him that humanity is still alive.

Watch the heartwarming moment in the video below.

Share
Previous Meet Calvin Klein, the man behind the legendary label: Net worth, boyfriend, marriages
Next Here is the story of the girl covered in polka dots – Matilda Callaghan

What makes a parent? Is it just the process of giving birth and welcoming a …