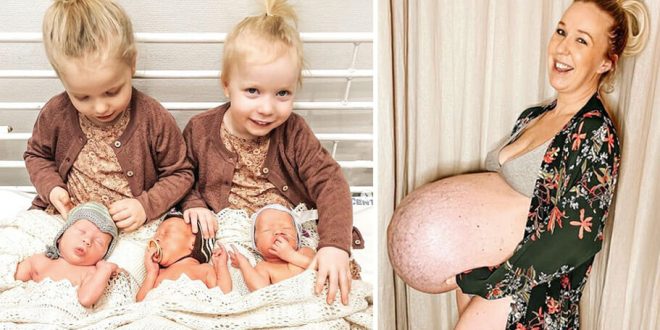 We have shared plenty of stories of incredible pregnancies with our readers, and the reason for it is that each and every one of them is fascinating in its own way. Well, the process of giving birth is a miracle all by itself, and when surprise multiple pregnancies happen, the fascination only grows bigger and bigger.

Michella Meier-Morsi and her husband Mark welcomed twin girls in 2018 after a year of IVF treatments. The girls were born via cesarean section at 37 weeks and only spent six days at intensive care before they were ready to go home.

Carrying twins is more complex than a single pregnancy and Michella constantly worried if everything would be fine with her girls while pregnant. ”When we got the news that we were expecting twins, I was extremely happy, and at the same time, paralyzed by fear.⁣ I was simply so scared of losing them. I read statistics, horrible posts on twin groups about respirators and losses, and I refused to buy anything for the girls,” she wrote on Instagram in 2020.

Her pregnancy wasn’t an easy one. She had a huge belly which often turned black and with bruises because her babies were big.

”My pregnancy was awful and my body is carrying around permanent evidence of it. Filippa and Ophelia, on the other hand, have been absolutely fantastic, and we have made the finest family rhythm with them,” the mom wrote.

After giving birth, she was forced to undergo a surgery because her abdomen muscles got split, a condition known as diastasis recti.

Although most new moms experience changes in their body after giving birth, not many have the courage to speak openly about it. Michella, however, wanted to share her story because she wanted other moms to know they are not alone.

In 2021, Michella fell pregnant again. Somehow, she knew she would have more than one baby again, but nothing could prepare her for what she heard at the doctor’s. She was carrying not one, not two, but three babies.

”When the midwife moves the scanner, we see a third black box. It’s like everything stops. We hear a third heartbeat. It’s getting completely quiet in that room, and I’m starting to cry. I can’t stop shaking and crying” she told the Danish magazine Expressen.

Mere days before giving birth to her triplets, Michella got honest about the way she felt and wrote on Instagram: ”I seriously do not feel ready for three babies.

”I naively thought that I would get ready at some point – that I would feel a joy that the pregnancy is coming to an end and that we should finally meet our trio.⁣ But if it were not for the extreme pain, the triplets would have to stay in the stomach for a month or three more. It all just feels so overwhelming.”

When Charles, Theodore, and Gabriel were welcomed into the world in January 2022, the mom couldn’t be happier. She does only get four hours to sleep each day, and she is aware that things would get even harder with five children under one roof.

”It is indescribably hard to have two three-year-olds and three premature babies.⁣ Much harder than I had imagined. [My daughters] are angry, defiant, enormously bored, and simply unruly and rude.⁣They miss us and definitely feel let down to some degree. And it’s completely understandable,” she writes on her Instagram.

She says that in her homeland, Denmark, where she and her family live, not much attention is given to women’s health after having kids, and that needs to change. She, however, is working with a psychotherapist and is hoping things to be better in the future.

Her frankness attracts a lot of people’s attention and she currently has around 300k followers on Instagram where she is brutally honest about all the challenges parenthood brings.

FacebookTwitter
Share
Previous Dad’s new wife tries to ruin the entire wedding, but bride’s mom has the perfect plan to stop her
Next Joy As Mom Who Was a Triplet Gives Birth to Quadruplets After Waiting for Ten Years Of Barrenness