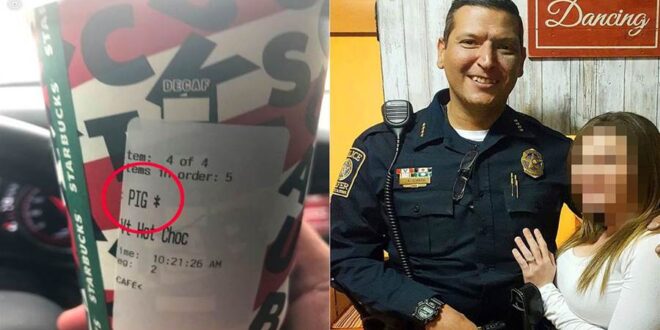 After a police officer ordered drinks for the dispatchers who work with him, he was stunned to find that a Starbucks employee had labeled the coffee cups with the word “PIG” in place of his name. However, once the incident went viral, the corporate office was quick to address the issue, giving an unexpected response.

As a thank-you to the dispatchers for working so diligently, an Oklahoma police officer headed to a local Starbucks and ordered a series of sugary drinks. Once his order was called, he picked up the drink carrier and returned to the station only to discover that his ticket didn't have the name he had given the barista just minutes earlier, and Kiefer Police Chief Johnny O'Mara wasn't too happy to hear about it. 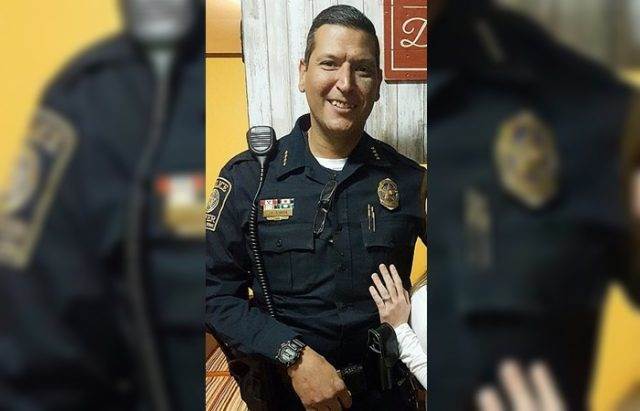 In bold print on the drinks, the word “PIG” replaced the officer's name. Shocked by the bigotry that one of his officers encountered at the hands of a complete stranger, the chief took to social media to lament the notion that employees can't seem to serve customers anymore without voicing their political opinions,Blue Lives Matter reports.

“One of my on-duty officers decides to do something nice for our dispatchers,” O'Mara wrote. “This is what he gets for being nice.” 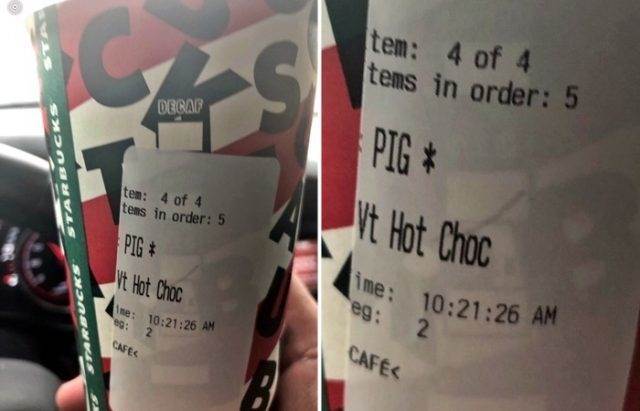 When O'Mara called up the Glenpool Starbucks to make a complaint, the manager told him they'd gladly “replace the coffee with a correct label.” However, the chief declined, later adding that he was too wary of the service he might receive. It was only after O'Mara's rant over the incident that corporate addressed the problem.

“What irks me is the absolute and total disrespect for a police officer who, instead of being home with family and enjoying a meal and a football game, is patrolling his little town,”the chief wrote. “Just pour the coffee please. Are we at a point where a task as simple as pouring an exceptionally overpriced cup of coffee is so complicated that it cannot be accomplished without ‘expressing oneself?'”

The company reportedly apologized to O'Mara, adding that they had “launched an internal investigation into this matter.” Starbucks confirmed that they had initially suspended the employee while the investigation was underway and ultimately terminated the worker. However, the woman who lost her job has now come forward with a complaint of her own. 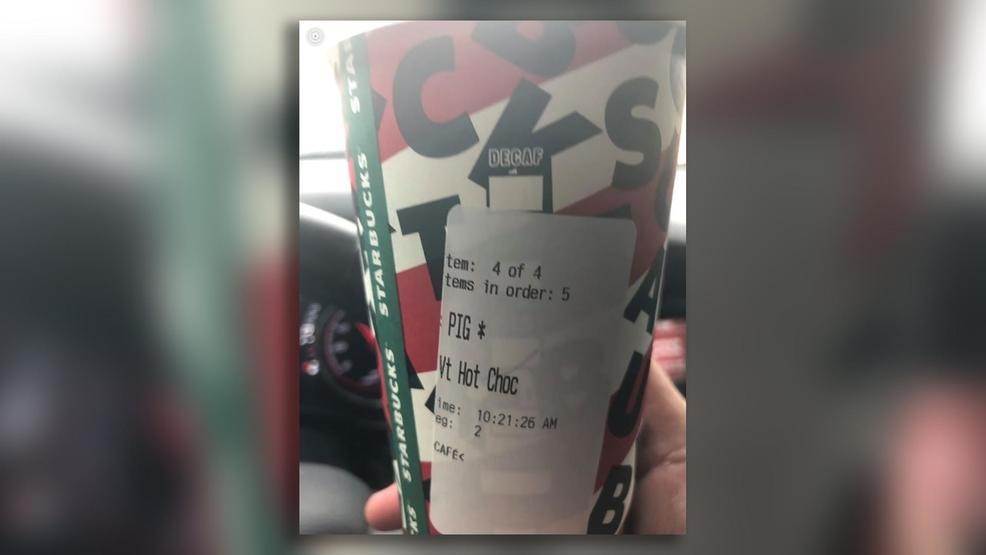 According to KTUL,former Starbucks manager Lola Price says that she was wrongfully terminated for the “PIG” label. She denies printing the label, claiming that it was a barista who entered the name and that the company was simply looking for someone to take the fall for what was turning out to be a public relations nightmare.

“I was terminated from my position because, Starbucks was looking for someone to take the blame for this and to save some face from their company,” she said.

Price had worked at the cafe for 9 months as a manager before she was let go without warning. She told the local media that she didn't know about the incident until Chief O'Mara called to complain about the label. She explained that she then tried to make it right by offering a replacement drink.

“They, to make it seem like they were right on top of everything, which they are, but they terminated me from my position with no cause,”she said. “No sort of disciplinary action that I've ever received or any of that. I have no idea why they would terminate me from my position.” 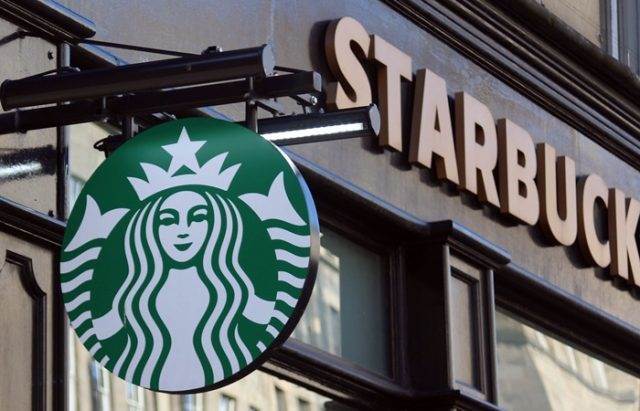 Price claims that she has never been in trouble with the company before and insists that she was used as a scapegoat to save the brand's reputation. She maintains that she had no involvement in the printing of the label, despite the corporate office alleging that she was responsible.

“This is absolutely unacceptable and we are deeply sorry to the law enforcement officer who experienced this,” Jory Mendes with Starbucks stated, according to KATU2. “We have also apologized directly to him and we are working to connect with the police chief as well as to express our remorse. The barista has been suspended pending the outcome of our investigation into this matter. This language is offensive to all law enforcement and is not representative of the deep appreciation we have for police officers who work tirelessly to keep our communities safe.”

Chief O'Mara says that the employee who printed the offensive label later reached out to him and apologized, arguing that the word was meant to be a joke. Still, he declined to name the culprit or their position at the cafe. 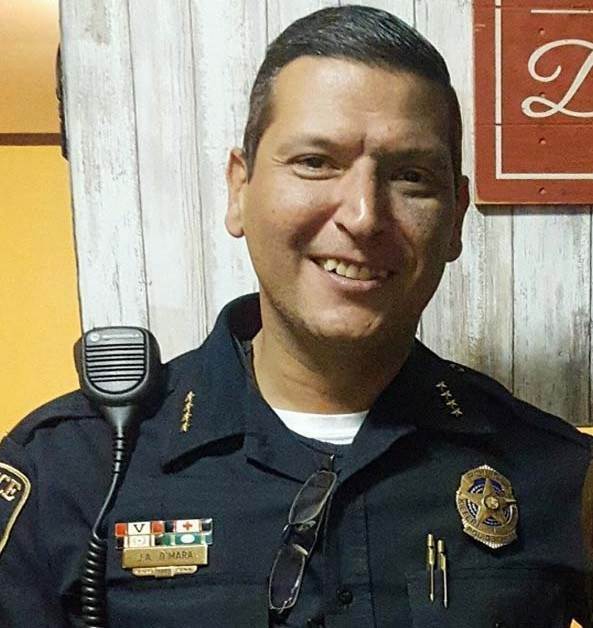 Chief O'Mara is grateful that the company apologized and has done everything necessary to remedy the situation. However, he says that he will not be returning to the cafe, citing his concern that his order may be tampered with in more ways than just the label.

Price continues to maintain her innocence, blaming an unnamed barista for the mislabeled drink. However, Starbucks has doubled down on its decision to terminate the former manager, leaving many to wonder who was involved in the incident.

Previous Popular After his son is branded a ‘Monster,’ Idaho dad teaches tormentors a brutal lesson
Next Retired teacher’s brutally honest words on parents criticizing the system has many people applauding: Do you think she’s right?