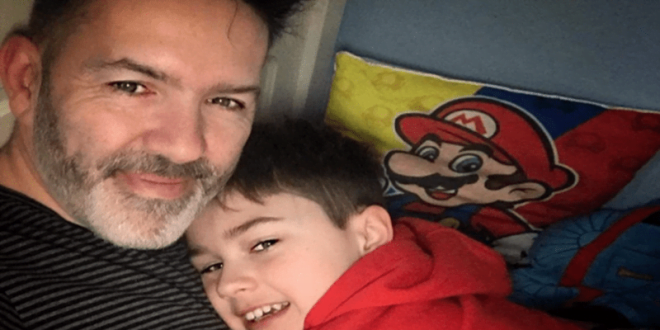 This amazing story of a dad wishing his autistic son a happy birthday is taking over the internet. And for a good reason!

The plea of this dad for his autistic son, who doesn’t have any friends, goes viral, and the birthday wishes start to pour in. And every parent that has a child on the autism spectrum is reminded of how beautiful humanity can be by this story.

Having a kid on the autism spectrum adds additional things to parenting. Those kids are created by God in order for others to see the world through a different lens. Although parents that have a child on the spectrum know that it can be brutal, besides being beautiful, because those kids have a hard time fitting into everyday society.

Meaning that we as friends, parents, neighbors, or simply strangers have to create a supportive community. Because every child on the autism spectrum is different in their own unique way.

Dad Requests for a Heartfelt Birthday Wishes for His Son

Recently Daniel Harrison, a kid that is autistic, wrote down two of his wishes, and one of them became a reality thanks to his father, Kevin. Kevin shared that because of his autism, Daniel preferred to play alone and had never asked to play with friends throughout his childhood.

But this year, he had a special wish that shocked everyone, including Kevin. The birthday messages that Daniel made were: to learn to drive and to make some friends.

Kevin was often sharing updates about his son on his social media, but when he learned of Daniel’s wishes, he wanted to make that birthday even more special and sweeter. So, he decided to write on his social media, “Daniel’s my son. Profoundly Autistic. Hasn’t one friend. It’s his birthday today.” And humbly persuaded to ask others to send birthday messages to his son.

Daniel’s my son. Profoundly Autistic. Hasn’t one friend. It’s his birthday today. In his ECHP he wrote that his two wishes were to learn to drive and make friends 😣 Please wish him a happy birthday. Please show him you care. Please share. ##happybirthday #autism #rt pic.twitter.com/Psu97TSj6g

He was not expecting the reaction that he got. His simple request for kindness went viral and got around 17,000 likes and thousands of birthdays wishes.

Among the thousands of messages that they got, Kevin was surprised that even celebrities such as Sharon Stone, Ariel Winter, and Russell Crowe took a moment from their time and wished his son a happy birthday. Also, many of the people who send those messages are parents who also have kids on the spectrum. For example, a mother from Minnesota named Sheletta Brundidge posted, “He’s got four friends in Minnesota and one with #autism whose name is Daniel too.”

Another dad, also with a child on the spectrum, posted a photo with his son and wrote the following” Hey Daniel, this is my son Jacob, also autistic, on his birthday last month. I’m sure he would love to be your friend if you met, provided you don’t mind hearing a whole lot about superheroes. Hope you had a wonderful day.”

The likes, birthday wishes, comments, and photos continued to pour in, and Kevin was overwhelmed by the response to his simple request. Then he realized, and as he said: People want to be loved, don’t they? People want to be liked. It’s a universal feeling,”

And we couldn’t agree more. We all are created to be loved but also to love. This story proves that we are never alone, and it takes just a little bit to show kindness and compassion to others. It also shows that no matter how different or unique we are, we are never alone!

A photo of Daniel and I and the viral tweet will appear in some fashion on the Rachael Ray show this coming Tuesday 😊 signed a contract #autismawareness pic.twitter.com/7zYiZLh00W

Kevin also shared that his son Daniel even learned how to drive through playing Mario Cart on his Nintendo. And also said something that all of us should remember “Don’t ever feel like you’re alone. Because I felt like that, and I know other families will. You’re not alone. Just simply that, people do love you.”