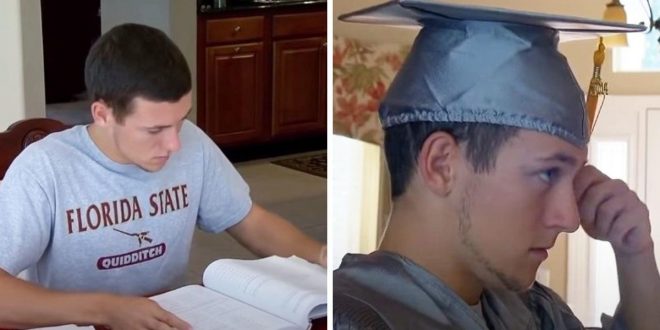 An Amazing Story about the Graduation of a Homeless Teen who Spent 12 Years on the Streets!

Most people hate high school and would do anything in order to skip a day and stay home. For some of us, though. High school holds some of the best memories in our lives. But, no matter in which group you find yourself in, I'm sure you've found yourself on the brink of tears countless times during your high school days.

I'm sure that you've struggled with bullying, pop quizzes, tests, exams, etc. but imagine adding all of this to being homeless. Unfortunately, this was the case for Griffin Furlong, an 18-year-old Florida Coast High School student back in 2014.

At the end of his year, just like all his peers. He stood in front of the audience and held his speech. Speech that shook all who heard it.

He started by saying that everybody judged him and thought he was good at school because he was smart. But, he didn't agree with that statement one bit. Instead, he said he was great at school because he didn't have any other choice, and he had everything to lose. Furlong lost his mother to cancer when he was only 6 years old, and after the death of his mother, Griffin's father tried hard to keep food on the table for the whole family while trying to also take care of Griffin and his brother. But, he failed, and the family ended up in a homeless shelter.

At first, Griffin and his family ended up in a rental property. But, due to the never-ending bills, they got evicted and ended up in a shelter. Talking about those times, Griffin remembers not knowing what tomorrow brings and where the next meal will come from. He never played with his peers nor experienced a normal childhood. He remembers nothing more than being treated like an animal. And seeing that made him want to make something of himself.

He always believed in the education system and knew that a good education could boost him up in the pecking order. So, he kept on going and ended up graduating as a valedictorian. Here's his motivational story.

Make sure to read to the end and see the video!

The only thing that Griffin remembers about his childhood is going to bed hungry and not wanting to wake up in the morning. After some time of feeling miserable, he decided to do something about that and decided to direct all of his energy into learning new things and becoming a better person. As per “People,” he graduated with a 4.65 GPA, which is an impressive score.

When asked what he would like to say to his peers, Griffin said that they need to have a purpose in their lives. In an interview with “Today,” he stated: “Just never give up … Never let anyone tell you that you can't do something because I've been told that all my life. People would tell me I wasn't smart enough, and now I'm here at the top of my class.”

If you try hard enough, you can achieve anything. And Griffin is the living proof of this motivational quote. When Griffin revealed in his speech that he was homeless, the crowd wasn't the only ones who were surprised by this. In fact, nobody knew about Griffin's situation, and most people there found about this at the speech. Teachers knew that he had problems at home but never realized that he was homeless.

Griffin hopes that his story will motivate other people to overcome their barricades and achieve anything they want! In order to thank Griffin for his speech, his classmates started a GoFundMe page for Griffin's tuition. They got more than $40000 for their friend and managed to help him cover his fonts for the tuition to Florida State University.

After his graduation, his life started getting a direction. He even managed to find a home with his girlfriend's family. They gave him a roof over his head, and he's forever thankful to them for that. His girlfriend's mother, Jennifer McCall, stated, “He's not defined by what happened to him.”

Speaking about the whole situation sure helped Griffin breathe a sigh of relief. As he said to “Today,” not many people know about his situation. Only a couple of his best friends know about it.

Griffin is a wonderful, hardworking young man. His story inspires many people, young and old, to achieve their dreams!

Previous Dad finds out his daughter bullied classmate – treats victim to shopping spree meant for her
Next Boy writes letter to dad in Heaven, surprised to receive this response