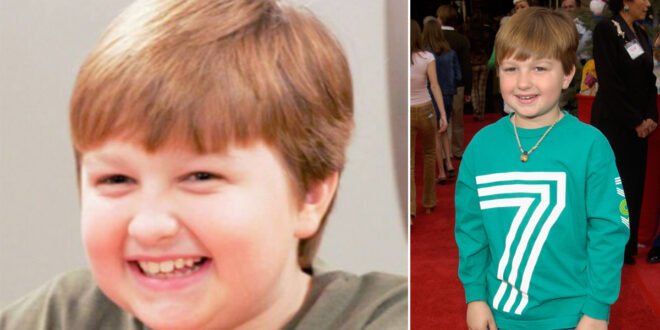 We’ve seen him grow from a young boy of 10 years to a man of 20 something right before our eyes and loved his character on one of the most popular TV shows in the history of film.

Angus T. Jones was offered the role of Jake Harper in Two and a Half Men when he was pretty young. His vibrant personality and wit, along with his beyond cute face was more than enough for the producers of the show to pick him up. Back in the day, he said, ”It was great not having to have the anticipation of a phone call.”

On the series, he portrayed the son of divorcee Jon, played by Jon Cryer, and the nephew of his womanizer uncle who led hedonistic and carefree life, Charlie, played by Charlie Sheen.

People fell in love with Angus from the very first episode of the hit show and he became a celebrity overnight with millions of fans. Each of the episode was watched by whooping 15 million viewers. Receiving $300,000 per episode, Angus made history as the highest-paid child actor ever.

Before playing the “half men,” Angus was part of commercials, with his first at the age of four, and was part of a number of movies, including Simpatico, See Spot Run, The Rookie, Bringing Down the House, George of the Jungle 2.

However, over the course of the ten years on the show that was his huge breakthrough, Angus had it enough from Hollywood. His character developed in a way not many expected, with Jake Harper turning into a teen who smoked marijuana and wasn’t interested in studying.

So, Angus left the show and some time after, he said he regretted being part of it. One of the reasons was him joining the Seventh-day Adventist church, a Protestant Christian church known for its conservative principles and lifestyle which were quite opposite of what the Two and the Half Men gave its audience.

“People say it’s just entertainment,” the actor continued. “Do some research on the effects of television in your brain and I promise you, you’ll have a decision to make when it comes to … what you watch on television. It’s bad news. You cannot be a true God-fearing person and be on a television show like that.”

In 2014, when he officially left the show, Angus spoke to KHOU and said, ”It was difficult for me to be on the show and be part of something that was making light of topics in our world where there are really problems for a lot of people.” He then added, ”I was a paid hypocrite because I wasn’t OK with it and I was still doing it.”

Later, however, he understood his words were offensive for the show’s producer, Chuck Lorre, and although he kept his opinion regarding the series, he still felt he should apologize to Lorre.

”That’s his like baby and I just totally insulted his baby and to that degree I am apologetic but otherwise I don’t regret saying what I said,” Angus said.

After the show, Angus has kept a low profile and attended college where he studied religion, saying the life away from the Hollywood glam was exactly what he needed.

Today, the 27-year-old actor looks completely unrecognizable. He has a long hair and a beard and posts confusing and often difficult to interpret messages on his Instagram profile.

No matter what he chooses to do in life, we are glad Angus was part of one of the best TV shows ever and treated us with laughter each time.

Previous The investigation shows that the woman who says she gave birth to 10 babies at once lied
Next Since his wife died he’s looking worse and worse.