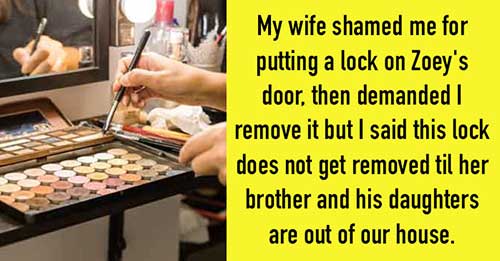 18 Y.O. Cousins Keep Ignoring 16 Y.O. Daughter’s Privacy, So Dad Installs Locks In Her Room And Upsets Both His Wife And Her Brother.

Be it a child or adult, it’s important to take permission before touching or taking things that belong to others. It’s courteous and good manners. Here is a story of a father who tries to protect his daughter’s privacy. Read below and tell me do you agree with the way he has dealt with the problem? (This story was sent to us by Kevin).

My brother in-law (Sammy) lost his home shortly after his divorce 10 months ago. He moved in with us and brought his twin daughters (Olivia & Sloane 18) with him a couple of months ago. His sister (my wife) and I have one daughter (Zoey 16) and she and her cousins aren’t close but get along fine.

Olivia & Sloane have no respect for Zoey’s privacy, none. they used to walk into her room and take everything they get their hands on. Makeup, phone accessories, clothes, school laptop etc. Zoey complained a lot and I’ve already asked the girls to respect Zoey’s privacy and stop taking things. My wife and Sammy saw no issue with this. After all, they’re girls and this’s typical teenage girls behavior. I completely disagreed.

Last straw was when Zoey bought a 60$ m.a.c makeup-kit that looks like a paint-set that she saved up for over a month and one of the girls, Sloane took it without permission and ruined it by mixing shades together while using it. Don’t know much about makeup but that’s what Zoey said when she found the kit on her bed, and was crying. I told my wife and she said she’d ask Sloane to apologize but I got Zoey a lock after I found she was moving valuable belongings out the house because of this incident!!!

Sammy and his daughters saw the lock and weren’t happy, the girls were extremely upset. Sammy asked about it and I straight up told him. He said “my daughters aren’t thieves!!! it’s normal that girls of the same age borrow each others stuff” he said Zoey could easily get another makeup kit for 15 bucks from Walmart and shouldn’t even be buying expensive – adult makeup in the first place and suggested my wife take care of this “defect” in Zoey’s personality trying to appear older than she is. He accused me of being overprotective and babying Zoey with this level of enablement.

I told him this’s between me and my wife but she shamed me for putting a lock on Zoey’s door for her cousins to see and preventing them from “spending time” with her saying I was supposed to treat them like daughters, then demanded I remove it but I said this lock does not get removed til her brother and his daughters are out of our house.

She got mad I was implying we kick them out and said her family’ll hate me for this. So I reminded her that I let Sammy and his family move in which’s something her OWN family refused to do so she should start with shaming/blaming them for not taking their own son and nieces/granddaughters in. If it wasn’t for her family’s unwillingness to help we wouldn’t be dealing with this much disturbance at home.

Everyone’s been giving me and Zoey silent treatment and my wife is very much upset over this.

Did the father and Zoey overreact?