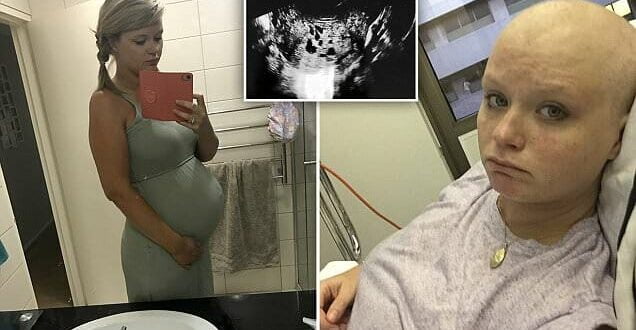 Mother of one thinks she’s pregnant. Instead, she gives birth to cancer tumor

A woman from Scotland named Lauren Knowles and her husband Trent, who were parents of one, were overwhelmed to learn that she was pregnant again.

Her pregnancy test was positive, and it was enough for them to start imagining how their lives would look like with two kids in the house.

When she was seven months pregnant, Lauren experienced bleeding. She was rushed to the hospital and prayed her baby to be safe and sound. Unfortunately, after the ultrasound, doctors revealed some shocking information.

It turned out it wasn’t a baby what she carried in her stomach. Lauren was experiencing a ‘molar pregnancy,’ which is a rare complication of pregnancy characterized by the abnormal growth of trophoblasts, the cells that normally develop into the placenta. Those cells grew into cysts at Lauren, and unfortunately, they were malignant.

“The tumour grew in my womb the same way a baby would,” Lauren told The Daily Mail. “The same hormones were produced and my pregnancy tests always came back positive.”

Lauren underwent a surgery and chemotherapy, but sadly, the tumor grew bigger at a worrying rate.

One day while at the hospital, Lauren experienced severe pain and cramps. She somehow managed to go to the bathroom where she ‘gave birth’ to the cancer mass which was as big as a pear.

“I lost all my hair and three months after starting treatment, I gave birth to the mass in the hospital toilets,” this brave woman told The Daily Mail. “The mass was the same size as a baby at 17 weeks so it was a big tumor to push out with no assistance.

“I was so relieved when I saw the tumor down the toilet as I knew my ordeal was finally over.”

Finally, Lauren was cancer free. Doctors advised her not to get pregnant again, but as she was determined to try once again, they told her to wait at least a year before she conceives.

And so it was. A year passed by, and Lauren got pregnant again. At first, she was concerned and wondered if everything would be just right this time. After an ultrasound, when she and her husband heard their future baby’s heartbeat, they were finally at ease.

Today, they are parents of two. Their second child, baby girl Indi, is 10 months old. She was born five weeks prematurely, but is a happy and a healthy child.

The couple moved to Perth, Australia, and Lauren makes sure she shares her story because she wants it to serve as an inspiration to others who are going through the same she went through.

Previous 80-YEAR-OLD SHOWS UP TO ENLIST IN UKRANIAN ARMY ‘FOR HIS GRANDKIDS’
Next The life story of Nancy Sinatra, Frank Sinatra’s daughter – from failing artist to fashion icon