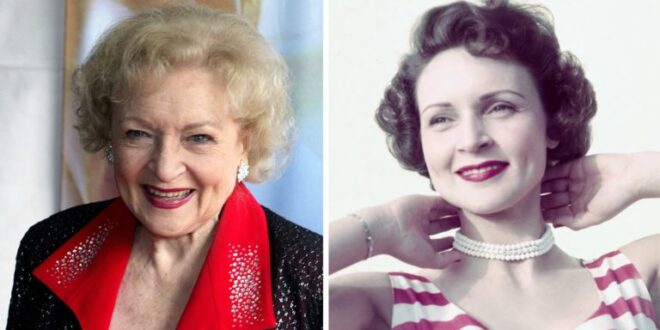 This Golden Girl’s career spanned over seven decades. She hosted shows, landed some legendary roles, and stole our hearts forever.

Besides her successful career in showbiz, White will also be remembered as a huge animal lover and someone who gave the world a million reasons to smile. The news of her passing was received with disbelief, especially because her fans were eager to celebrate her milestone birthday. White herself said in an interview a few weeks ago that she was looking forward to her 100th birthday celebration. Sadly, she didn’t reach it.

Tributes came pouring in. Her friend of many years, Jeff Witjas, told People, “Even though Betty was about to be 100, I thought she would live forever. I will miss her terribly, and so will the animal world that she loved so much. I don’t think Betty ever feared passing because she always wanted to be with her most beloved husband, Allen Ludden. She believed she would be with him again.”

“The world looks different now. She was great at defying expectations. She managed to grow very old and, somehow, not old enough. We’ll miss you, Betty. Now you know the secret,” Ryan Reynolds, her co-star on the film The Proposal, wrote on Twitter.

Sandra Bullock told People, “I don’t drink vodka … but I will tonight, on ice, with a slice of lemon with a hot dog on the other side, and just be ok being sad. I’ll have to buy some rose-colored glasses because Betty was that for all of us.”

Comedian Kathy Griffin, shared a beautiful story of the very first encounter between her and Betty White.“Betty White. Where do I begin? I’ve known her long, but I think the first time I met her was when she was a guest star on Suddenly Susan in the late 90s. Everyone was very excited she was on the show. I had accidentally parked in her parking spot that day. She walks in, yells from the back of the soundstage for everyone to hear, ‘Where’s that redheaded b*tch who stole my parking spot???’ SWOON. A friendship was born.”

President Joe Biden honored White by saying that she “brought a smile to the lips of generations of Americans.”

White was born on January 17, 1922, in Oak Park, Illinois. Over the years, she was part of a number of shows, most famous we’d say, The Mary Tyler Moore Show in which she played the role of Sue Ann Nivens that brought her two Emmy Awards for Outstanding Continuing Performance by a Supporting Actress in a Comedy Series, and Golden Girls.

“When they announced my name that night, and Ed Asner presented it to me, I was a mess,” White recalled.

“I was so excited, so happy. And so grateful. I started out as an actress in the business, but then I did game shows and talk shows. I became a ‘television personality.’ So everybody was so surprised. ‘Why Betty can act, isn’t that amazing?’ It really did turn my career completely around.”

White was married three times, with her third husband, Allen Ludden, being the biggest love of her life. They knew they were meant for one another the moment they laid eyes on each other on the game show Password which Ludden hosted. It took him some time to convince her to marry him, not because she didn’t want him to be her husband, but because she didn’t want to leave California for New York, something she regretted later in life.

Ludden died in 1981, and White never remarried, saying, “Once you’ve had the best, who needs the rest?”

Today, just days after her passing, sources reveal that White was forced to spend her final years in her home in Los Angeles and move out from the one in Carmel, California, just outside of Monterey, which she and her late husband Allen Ludden built in 1978, as per New York Post. Apparently, she wasn’t happy with leaving California, but she needed at-home-care and her Los Angeles home was more accessible.

“If she had it her way, Betty would’ve lived and died in that home [in Carmel]. It’s the home she shared with her husband. It’s where she felt more comfortable,” a source told with New York Post.

White will always be remembered as someone who left deep impact on Hollywood and the TV industry in general.

Rest in peace, Betty White, you will never be forgotten.

Previous Little girl dies days after eating a tiny battery – family warns other parents of the dangers
Next Couple’s Reply When Their Child’s Biological Mother Asked “Do You Want Another Baby?”