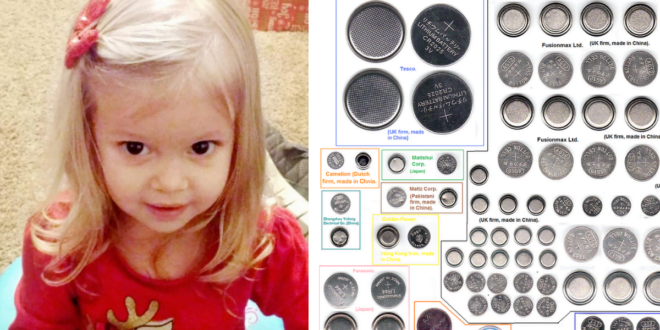 Life is full of surprises, and sadly, we never known when a tragedy could struck. For the family of sweet Brianna Florer, that Christmas was the last holiday they got to spend around her company, because a day after the celebration took place, Brianna died.

No one was prepared for such horrific thing as the death of such young lady.

Her grandpa, Kent Vice recalls the day when his granddaughter swallowed the tiny battery which lead to her passing. What was supposed to be one of the best days of their life turned into a nigthmare.

“On Saturday she was fine,” Vice said. “It was a perfect Christmas.”

No one in the family was aware that Brianna had the battery in her body until she started throwing up blood. This scared the parents and they looked for a doctor to check on her, but where they live, Delaware County, there aren’t many medical professionals.

Brian and Stephanie Florer called the Jay ambulance which met them at a convenience store to check the girl’s condition. But it wasn’t until little Briana threw up “a massive amount of blood” that they took her to the hospital at the nearest town of Grove, Oklahoma.

There, they were told how the battery was in Brianna’s system for a few days.

Doctors tried to take her to another facility in Tulsa but the weather was really bad and no medical helicopters were available so Brianna was instead rushed into surgery.

Sadly, there was nothing that could be done for her life to be saved.

“They operated on her for 2½ hours, but they couldn’t stop the bleeding,” Vice said. “They believed the battery ate through to her carotid artery by way of her esophagus.”

If swallowed, batteries can do extensive damage to the body and even lead to death such in Brianna’s case.

According to The National Capitol Poison Center in Washington D.C, between 2005 and 2014 there were 11, 940 incidents of children swallowing batteries 15 of which were fatal.

“…if the battery lodges in the esophagus or digestive tract, it can open and release an alkaline substance that can cause corrosive or burning injuries,” says Randy Badillo of the Oklahoma Poison Control Center.

In cases where lithium button batteries are inside the system, they craete electrical currents which damage the body by creating chemical reaction that produces hydroxide.

Briana’s family is sharing the girls story in hopes of preventing anything similar from happening to other children.

They ask from parents to keep the batteries away from the reach of young kids.

We as parents should be extra cautious and keep a close eye on everything our little ones do. Batteries can be found in many household gadgets where they come easy accessible to the children.

Below is a video that shows the dangers of swallowing batteries. Make sure you watch it and share it with friends.