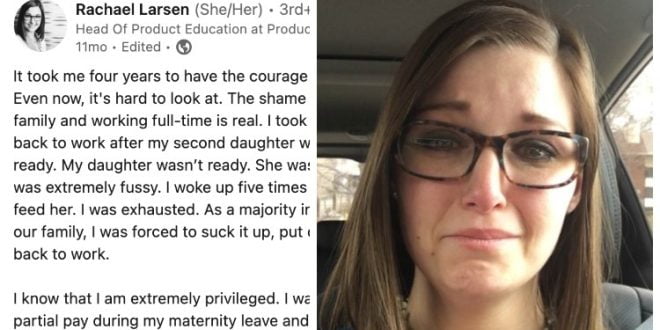 When a woman becomes a mother her entire world changes drastically. All of a sudden everything is about that bundle of joy, and nothing else is as important as making sure the child is well taken care of.

In most countries, women are given plenty of time to be around their little ones before they get back to work. Whether it is nine months, or even two years in some parts of the world, American moms aren’t that lucky. Oftentimes, maternity leave is about 12 weeks long and that is if the new mom is eligible for it. Sadly, many moms in the U.S. aren’t.

When Rachel Larsen gave birth for the first time, she got back to work just eight weeks later. At the time, she didn’t see it as an issue. But when she got her second child, she didn’t feel ready to leave the baby home while she was working. This time, she took 12 weeks of maternity leave, but that didn’t feel enough.

On her first day back to the office, Larsen took a selfie which showed all her pain and devastation. She didn’t share it with anyone until four years later.

She starts her post by writing that she does feel privileged she is even eligible for maternity leave but adds that she feels “shame around raising a family and working full-time.”

She didn’t really have choice as her family depended on her income. “As a majority income source for our family, I was forced to suck it up, put on a smile, and get back to work.”

Larsen shared her story on LinkedIn. Many moms in her position were quick to support her and share their personal stories.

A user by the name of Katarina P. wrote, “I was ‘lucky’ to have 3 months maternity leave with my last 2, but really, who are we kidding? At 3 months old, babies are just barely starting to learn to sleep through the night, which means a mother is returning to work sleep-deprived. Not just ‘didn’t sleep well’; I mean where you maybe got a few hours of sleep (interrupted sleep) every night for the past not just 3 months, but also, who sleeps through the night in the latter half of their pregnancy? To put another perspective: Sleep deprivation is also a torture-tactic in some military settings. Yet we expect mothers to return—sleep-deprived— ready to pull up their sleeves & bounce back & be like ‘normal’ when nothing about their experience there is normal.”

Another user, Marta Tubielewicz (Nestorowska). commented, “Maternity leave in US was one of the greatest cultural shocks I had to deal with. When I was pregnant with my first child, being here in US, in Poland the new maternity law was just established giving women 8 months to 2 year paid time with their children. Fathers were also given paternity leave. I didn’t take a picture on my first day back to work after maternity leave, but it was one of the hardest days in my life…without any exaggeration! Thank you for sharing!”

One thing is certain, American moms don’t have it easy. Do you believe they deserve more months to be with their babies before they go back to work?