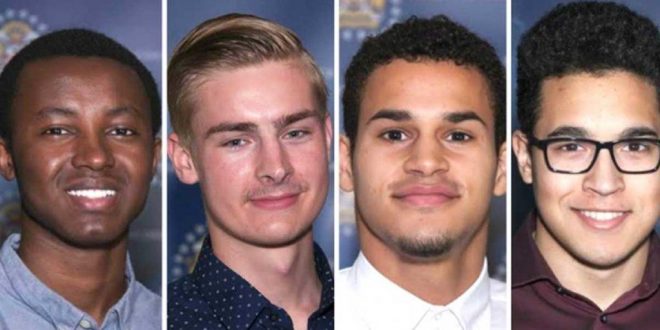 Sometimes, being in the right place at the right time isn’t enough to make things right. Often, it also takes courage to show you are ready to stand for those in need and for the vulnerable.

What seemed to be a night out like any other turned into an experience these four young boys will never forget. Arnaud Nimenya, Carsyn Wright, James Hielema and Starlyn Rives-Perez were skateboarding in an underground parking lot when they saw a quite unusual sight. A young girl, around 15 years old and intoxicated, had been forcefully dragged through the place by a well-dressed older man. This alarmed the boys who could feel something wasn’t right. The girl’s condition was pretty bad. She was so drunk that one of the boys recalls how “she was screaming and yelling. She just wanted to be out of there. She was all scuffed up and dirty.”

But, after the boys approached closer in hopes of helping the girl get rid of that man, he claimed he was her father. She didn’t really say anything regarding that so they decided to step back.

“You don’t want to really think of the worst in somebody like that. You don’t want that situation to be real, so you just brush it off and hope for the best,” Wright said.

However, the boys’ somehow knew he wasn’t telling the truth so they decided to turn around and check on the girl once again.

It turned out it was a decision that would help save this lady’s life.

Having returned back, they were completely shocked by the gruesome sight. The man was sexually assaulting the young woman who was helpless and couldn’t defend herself.

“You walk in, and you see something like that, and you freeze. You don’t know what to do,” Nimenya, one of the young men, said.

They knew they had to act as quickly as they could so they ran towards the attacker. He started running and attempted to escape the parking lot.

“He was trying to walk out and walk away from us,” said Nimenya. “He pushed me aggressively out of the way, kinda like just gives me the smile, like, ‘I can do this. You can’t do anything about it.’”

These young heroes wouldn’t just let the attacker off the hook so they were determined to catch him. This ended with a physical confrontation after the man started hitting the boys with one of their skateboards. Luckily, the police arrived just in time.

The boys were glad the woman was now safe and sound. The police officers, however, wouldn’t allow the boys’ heroic deed go unnoticed so they decided to thank them for their bravery and courage by inviting them to the Chief’s Awards Gala where they would be presented with awards and the public recognition they deserved.

We are so proud of the way these young men handled the situation. They even risked their life for the well-being of a vulnerable and defenseless lady. You guys are our real life heroes and a true inspiration.

Previous Kirstie Alley’s struggled with her weight over the years, but look at her now, she’s such an inspiration
Next Mom who struggled with infertility shares her roller coaster story