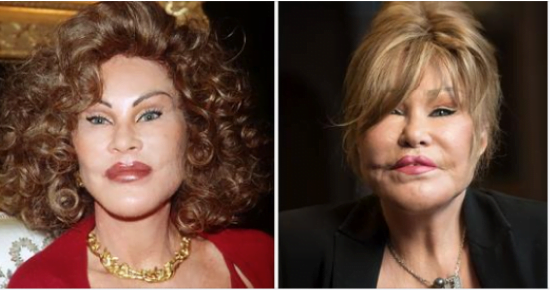 Inside the life of ‘Catwoman’ Jocelyn Wildenstein, the Billionaire socialite

Chances are you might not know of this woman by her real name. Jocelyn Wildenstein, aka “Catwoman,” appeared in the spotlight durning the nineties during her high-profile divorce from art dealer Alec Wildenstein.

There was no mention of her in the media for almost twenty years following her divorce.

Jocelyn turned 80 recently and has appeared in the spotlight again …you might want to take a deep breath before seeing how she looks today.

In 1945, Jocelyn Wildenstein was born in Switzerland, her father worked in a sports shop, and her family was lower-middle-class.

Jocelyn realized at a young age that she could date wealthy men to gain social status.  She dated Swiss film producer Cyril Piguet at the age of seventeen.

Jocelyn relocated to Paris after their break-up, there she socialized in even more exclusive circles and found new love with Italian-French filmmaker Sergio Gabbi.

”My life changed then. Lausanne is very plain, but I began meeting exciting, glamorous people,” Jocelyn explained to a New York Magazine.

Jocelyn utilised her social skills, however she did have a talent for more practical things. Apparently she is a skilled hunter and worked as a pilot and has spent a lot of time in Africa.

”Africa is a paradise. You meet people who look at life differently. They love the adventure,” she comments.

in 1977, Jocelyn met her future husband, Alec Nathan Wildenstein – an American billionaire art dealer and racehorse breeder during a safari in Kenya.

The marriage was surrounded by skepticism from the start as Alec’s father was against it and refused to show up for the second wedding ceremony which was held in Jocelyn’s hometown of Lausanne.

”He was against marriage in general. My father checks things out. My father tried to warn me,” Alec explained.

However the couple were married for thirteen years and raised two children together, Diane and Alec Jr. They settled in New York’s ‘Olympic Tower,’ a 51-story building in the Midtown Manhattan neighborhood of New York City before moving to a townhouse on the Upper East Side.

Jocelyn became interested in plastic surgery and started going under the knife. Alec got a facelift after Jocelyn pointed out that his eyes looked ”baggy.”

Jocelyn was soon nicknamed ”Catwoman” and “The Lion Queen” – as she appeared more like a lynx.

She even has a pet lynx which she remarked “the lynx has perfect eyes.” Jocelyn has gone through extensive facial transformation and says that her appearance was partially natural.

“If I show you pictures of my grandmother, what you see is these eyes — cat eyes — and high cheekbones,” she said.

Alec grew tired of his wife’s fixation on extravagant and cosmetic surgeries.

“She was crazy. I would always find out last. She was thinking that she could fix her face like a piece of furniture. Skin does not work that way. But she would not listen,” he said.

In 1997, their marriage ended when Jocelyn found her husband in bed with a young Russian model. The messy divorce dragged on for two years while the parties negotiated. Every detail of their marriage was revealed by the media and Jocelyn’s appearance was not to her advantage.

The tabloids dubbed her “The Bride of Wildenstein.” Jocelyn was forced to hire Edward Rollins to handle her PR.

Their children took Jocelyn’s side when Alec cut off their mothers phone and credit cards and owered her monthly allowance from $150,000 to $50,000.

Jocelyn received $2.5 billion along with a payment of $100million each year for thirteen years afterward in her settlement. The judge made one strange condition which forbade her from using the money for cosmetic surgery.

In 2001, Alec inherited half of his father’s US$10 billion fortune so he didn’t have any problem paying Jocelyn. In 2008 Alec passed away at the age of 67.

Jocelyn stayed out of the public eye following the divorce but did occasionally appear when her French designer boyfriend Lloyd Klein arranged fashion shows.

A year later the couple did a rare interview with Daily Mail TV.

Lloyd Klein was asked about her unique appearance and explained that he couldn’t understand why Jocelyn had been dubbed ”The Catwoman.”

”She never really did anything to change her face. I have pictures from 16 years old where she looks exactly the same as today,” said Klein.

Jocelyn has apparently spent around $6.7 million on plastic surgery over the years, however she thinks she looks the same as when she was younger.

“When we are young, there’s a certain freshness we lose with the years. But you still find the same eyes, same high cheeks, or same nose. I think I was more pretty,” Jocelyn commented.

The last public appearance that Jocelyn made was in 2019, when she appeared at an exhibition during Art Basel Miami Beach. As usual, she came there in the company of her partner, Lloyd Klein.

Perhaps we will be seeing more of “Catwoman” in the near future in a documentary series about her spectacular life.

“She now really wants to talk about her life, what drove her, how she built a business with her fiancé in the craziness of their life together in New York,” her publicist, Brandon Cohen, explained.