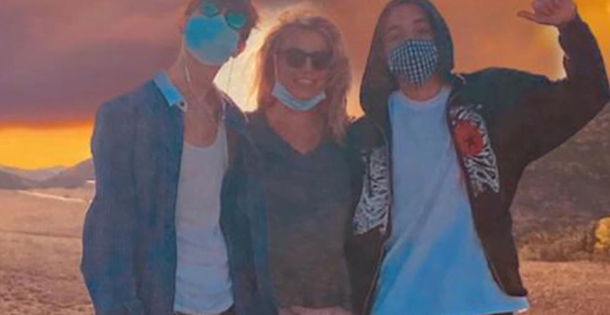 Kevin Federline continues to bash Britney Spears and the mother of their two sons after he shares videos of her disciplining the kids.

In a deleted Instagram post, he shared the videos recorded years earlier. And it shows Britney Spears having conversations with her teenage sons.

In one of the videos she was heard saying, ‘Better start respecting me, are we clear?’ And the sons respond by saying, ‘Yeah’.

In another video, she says, ‘I don’t know what to say to you. I am in shock.’ And the boys respond by saying, ‘Then don’t talk.’

This sparked a debate online about whether this is a common struggle most parents have with preteen children or emotional abuse.

The decision Federline made to share the videos, comes just after Spears and her husband Sam Asghari hit back at him after the interview he did with Daily Mail.

We all accept that Britney Spears has been in the public eye most of her life. Her parenthood, marriages, mental health problems, and legal disputes have been in the harsh light of the camera.

There are people who stood with her in the spotlight, such as Kevin Federline. They had a romance together, and Kevin was her husband and the father of her two children, Sean 16, and Jayden 15.

He tried to keep their sons out of the spotlight while Britney Spears dominated the spotlight with family disputes. Britney purchased a $10 million mansion close to the Federline family home in LA, Kevin revealed that the children didn’t see their mother for many months, at their own behest.

The boys have agreed they aren’t seeing her right now. They haven’t seen her in a couple of months, said Kevin. They also decided against attending her wedding, he added.

Kevin thinks that her public struggles will have an effect on the teenage sons. It is the most difficult thing I have ever had to complete, he says. Britney also posted nak*d selfies on social media.

I can’t imagine how hard it is for them, to be a teenager and to attend high school, while all these things happen.

Apparently, things have changed for and for her Kevin Federline. Recently, news of the conflict between Britney Spears and her ex-husband and the children is being shared on social media.

She now lives with her new husband and feels very happy. But the divorce events are not over yet. Her two sons lived with her, but now Britney Spears says that the relationship with Federline has changed.

See also: Britney Spears Admits She Was Obnoxious On Her And Sam Asghari’s Honeymoon

Everything seemed to be going well and Spears and her ex were co-parenting well. But things changed. She was happy with her children’s life and education. This was a very big challenge for him.

However, Federline would like to have found a way to show Spears that lifestyle affects children. He gave interviews and revealed many things. Recently, the famous singer and her husband are throwing Federline’s statements.

He claimed that the children are teenagers and have started to understand things. According to him, the children do not want to meet their mother.

Britney Spears denies this and is trying to prove the opposite. In this story, the music star’s husband entered, declaring that Spears is a responsible woman, and Federline’s statements are not true.

See also: Steve Harvey Reveals What He Kept Secret From His Wife All These Years

He admits that his wife is successful and exposes her body but does not overdo it. But he does not forget to explain that Kevin’s profession has influenced the growth of children because he is a model.

He supports his wife in this matter, admitting that she is right. Britney also contradicts this statement saying that her ex-husband is turning the children against her.

“Children’s growth is delicate and there comes a moment when they will make their own decisions in life. But here the problem lies in the assumptions of my ex-husband.”

She says she feels hurt in this matter. We wish you to solve this problem as soon as possible.

Previous Is Courtney Cox All Right? After Her Most Recent Appearance, The “Friends” Star Raised Concerns
Next Robin Williams’ wife explains why he committed suicide.