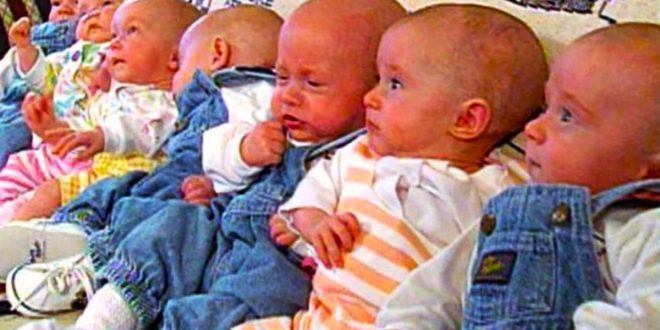 All the McCaughey family ever wanted was another child. However, nothing could prepare them for what awaited them after they turned to the medicine and undergone ovulation-stimulating treatment for infertility.

Kenny and Bobby from Iowa soon became parents to the world’s first surviving set of septuplets. On November 19, 1997, Kenny Jr., Alexis, Natalie, Kelsey, Nathan, Brandon and Joel were welcomed into the world and quickly made worldwide headlines.

When the parents first learned the news of the number of babies growing inside Bobbi’s belly, they were overwhelmed. Happy and excited, but at the same time fearful for the baby’s fate, they prayed to God for all of their bundles of joy to get to the world healthy.

Doctors told them how risky the pregnancy was and even advised them to terminate the life of some of the babies, but for these brave parents that was never considered an option. They somehow knew things would turn for the best at the end and continued with the pregnancy. Thankfully, it was the best decision.

Raising eight children was a lot, but the saying ‘it takes a village to raise a child’ turned to be true for the McCaugheys who were offered help from the entire community. Once their story shared, many companies and donors stepped in for them, and it made things a bit easier.

The siblings graduated from Carlisle High School in 2016, and KCCI-TV said back then, “the siblings will go their separate paths, including military, the work force and college.”

Today, the septuplets are 23 years old and carving out their own paths, but they are still as close as always.

Living with so many children under one roof must be challenging and fun. We wish the McCaugheys all the best in the years to come

Check out the video below to see their story and how they looked like back in 2015.

Previous Woman who said she gave birth to 10 babies at once was lying, inquiry finds
Next Cher’s son Chaz Bono shares his mom’s concerns and feelings over his transition from female to male