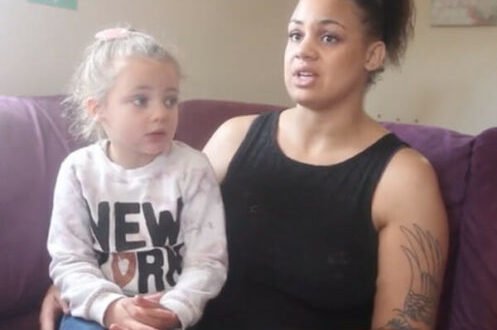 A mother named Nicole Langmead and her four year old daughter Kaya were having fun time at the local McDonald’s restaurant when the girl felt the need to go to the bathroom. She asked her mom whether she could go all by herself, to which the mom said yes.

After all, the mother was right there, staying next to the bathroom making sure Kaya was all fine. However, she soon regretted the decision of leaving her daughter inside alone.

Nicole recalls that just before Kaya entered the bathroom, two girls were stepping out of it laughing hysterically. But that, of course, didn’t raise the alarm as it’s something we see every day.

At that point, nothing could really warn this mother of the danger that was awaiting her little girl.

Sadly, Kaya suffered serious injuries because those two mean girls they saw minutes before put superglue on the toilet seat. According to Metro, the little girl’s skin ripped from her legs and it caused her unbearable pain.

The McDonald’s staff acted quickly and provided help. Police was also alerted of the incident. They are now trying to identify and locate the girls. What they did was cruel and mean and they have to suffer the consequences of their careless behavior.

Nicole is now trying to spread Kaya’s story in order to warn other parents to be extra cautious when letting their kids alone to the bathroom of restaurants and other public places.

Check the whole story in the video below.

Previous She went to the emergency room with a horrible stomach pain
Next Betty White’s net worth: This is how much money she had when she passed away