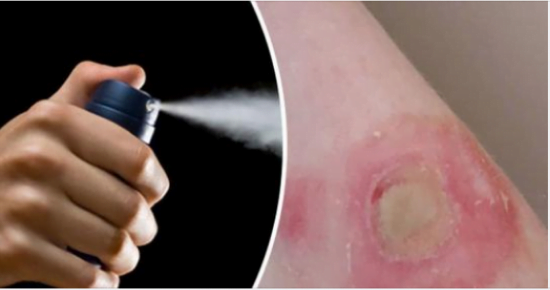 A fourteen year old girl has suffered serious second-degree burns from a deodorant spray following a shocking new craze that is sweeping schools in across Britain.

Ellie Prescott from Yate, near Bristol, has been left with severe injuries after her friends sprayed Lynx deodorant on her arm for at a close distance for a number of minutes, which left her with painful blisters.

The teenage may now require skin graft as a result of the severity of her burns.

The girls mother, Jamie Prescott has urged all schools and parents to knuckle down on the “horrendous” craze that is a serious danger to children’s safety.

Mrs Prescott shared pictures of her fourteen year old daughters arm covered in severe blisters and burns on Facebook and the post shared over 3, 000 times.

She wrote: “For any parents who have children, please, please sit them down and show them these pictures.”

The “deodorant challenge” involves spraying deodorant at a close range to the skin for as long as possible, to see how long one can tolerate the prolonged “burning” sensation.

The aim is to see who can bear the pain the “longest”.

Mrs Prescott said her daughter, who has now transferred to Bristol Technology and Engineering Academy, still has to visit the nurse several weeks after her injury as the burn is still “weeping excessively”.

She told Somerset Live: “She went out and met with [friends] for a couple of hours.

“Apparently, when they asked her to put out her arm she did it but she had no idea of the consequences and hadn’t even heard of The Deodorant Challenge before that point.

“Since then other children have asked her what is wrong with her arm and when she has told them, they have then replied that they have also had it done to them and showed her their scars.

“It is still weeping excessively.”

Despite moving schools, Ellie still claims the dangerous game is still being played in her new school.

She said: ‘It seems fairly common, a lot of people have showed me their arms after doing it.

“My new school has sent out a warning to everyone about the dangers of it happening.”

Mrs Prescott has urged all parents to check up on their children and warn them of the dangers.

She added: “I seldom rarely do this, but on this occasion, I would like this post spread wide and far.

“For any parents who have children, please, please sit them down and show them these pictures.

“The pictures below are that of my Year 10 daughter’s arm THREE WEEKS ON which may still as yet require a skin graft.

Previous Husband admits to sleeping with wife’s sister. But her response is the best thing i’ve ever read
Next She went to the emergency room with a horrible stomach pain