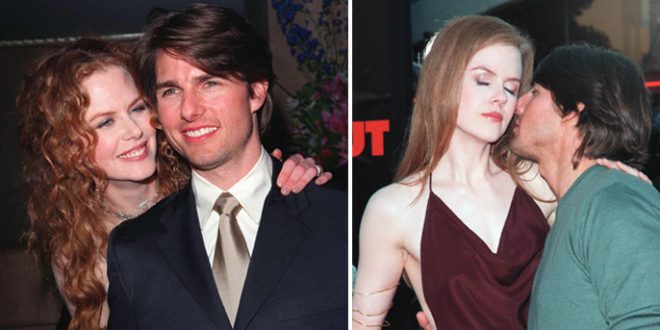 Nicole Kidman gets honest about her failed marriage with Tom Cruise

When Tom Cruise and Nicole Kidman tied the knot back in 1990, they became one of the most popular Hollywood couples. At the time, the Top Gun star was more popular than Kidman and was considered a heartthrob many loved both for his immense acting talent and his incredible looks.

The two first met on the set of Days of Thunder after Cruise convinced the producers to make her his co-star in the film. Apparently, he noticed her in the 1989 flick Dead Calm and was eager to meet her in person ever since.

At the time, Cruise was married to actress Mimi Rogers but the chemistry between him and Kidman was too strong to ignore.

“I had three very strong relationships before I met Tom. But I was never going to get married. Never. But he was just the most incredible, unusual man I’d ever met,” Kidman said.

The two married during a private ceremony which lasted for 30 minutes. Only few people from both sides were invited.

Ever since they said I do, all eyes were on them. Tabloids followed their every move and were eager to follow their love story. Both Cruise and Kidman wanted to be parents, but she experienced some fertility issues and upon suffering an ectopic pregnancy, the two decided to adopt daughter Isabella Jane Cruise and son Connor Cruise when they were just months old.

Cruise spoke of Kidman as of the love of his life. “It was that special connection when you recognize your soul mate. She is a person who understands. It was as if a whole new life had started for me,” he told Vanity Fair in 2002.

Kidman was in love with Cruise as much as he was. ”I fell madly, passionately in love. And as happens when you fall in love, my whole plan in terms of what I wanted for my life—I was like, ‘Forget it. This is it.’ I was consumed by it, willingly. And I was desperate to have a baby with him. I didn’t care if we were married. That’s what I wish I’d done,” she once said.

The two resembled a match made in Heaven and that is the reason why everyone was left in shock when Cruise filed for divorce after 11 years of marriage.

He cited irreconcilable differences as a reason for his decision.

Kidman was also shocked. She said the divorce wasn’t something she expected and added it came out of the blue.

Rumors were that Cruise decided to end the union because she couldn’t give him children. Some said the reason was that Kidman wanted to spend a lot of time in Australia. Others believed the Scientologist Church Cruise is part of was the reason the two split.

“Our life together was perfect. It took me a very long time to heal. It was a shock to my system. That was a great relationship. I think it ran its course. I was really damaged and not sure whether love and marriage were ever going to happen again to me,” Kidman said.

However, she never really wanted to speak of her failed marriage to Tom Cruise and tended to keep things private until recently.

This year, she spoke to Harper Bazaar for its upcoming October issue and revealed that her career was overshadowed by all the rumors surrounding her divorce.

“I was young. I think I offered it up? Maybe I’ve gotten a bit more trepidatious, but I’m always trying to be as open as possible. I just prefer to live in the world that way.”

“I’m wary at times, and I’ve been hurt, but at the same time I much prefer a warm approach rather than a prickly shutdown approach. My husband, Keith, says that when he met me, he said, ‘How’s your heart?’ And I apparently responded, ‘Open.’”

Nicole Kidman is happily married to musician Keith Urban. They have two lovely daughters together.

As for her adopted children, Kidman doesn’t really speak of her relationship with them, but apparently, they are in good terms. We are glad to hear that, especially because they weren’t that close after they decided to follow their father and join Scientology.