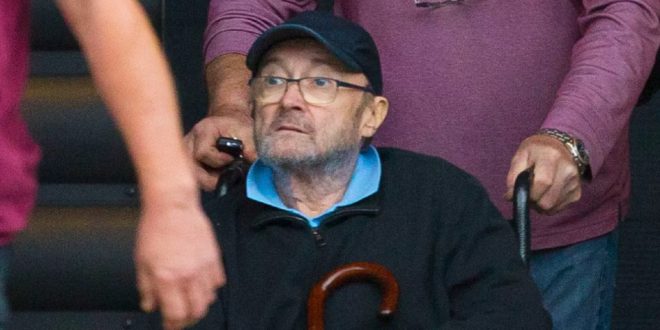 Phil Collins reveals he can “barely hold a drumstick anymore”

With eight Grammy awards under his belt, Genesis drummer and lead singer Phil Collins is one of the most prominent musicians there are. He is one of only three musicians, alongside Michael Jackson and Paul McCartney, who have sold more than 100 million albums both as a solo act and a member of a band.

Born on January 30, 1951 in London, England to parents who possessed creative spirits, Collins fell in love with making music.

When he was just five, his uncle made him a drum kit out of tambourines, triangles, cymbals and toy drums, Collins recalled. “The old cliché is, ‘Well, at least it will keep him quiet’,” he told Interview Magazine.

Soon after, he found himself performing in shows at his parents’ boating club.

“When I started playing seriously, the English beat thing was just happening, the Shadows and bands like that. It was the very early ’60s,” Collins recalled.

“I remember buying Please Please Me. I used to put the record player on very loud and set up my drums so I was facing the mirror, that way you don’t look at what you’re doing.

“Then when I was fourteen I went to a teacher to learn to read drum music. I figured when this rock-and-roll thing finished I would have to make a living playing in a dance band or in an orchestra pit. So I learned to read drum music, but I found that my capacity for reading was not anywhere near as good as actually playing by instinct.”

It was in the 1970 that Collin’s life changed forever. He was already playing in some bands when he came across an ad by a group called Genesis which was looking for a drummer. He decided to get in touch with them and the rest is history. In the first years of Collins being part of it, the group released five albums with singles that reached the charts.

After the founder and lead singer of Genesis left the group, Collins took his place. He was both a singer and a drummer. Speaking of his new role, he said he didn’t really feel comfortable, but as the group failed to find a singer, he simply stepped in.

Besides being a member of Genesis, Collins also had a very impressive solo career. With smash hits such as In The Air Tonight, You Can’t Hurry Love and I Don’t Care Anymore he soon became one of the best in the music industry.

When he decided to leave the group and focus on his solo career, Collins said: “Having been with Genesis for 25 years, I felt it time to change direction in my musical life.

“For me now it will be music for movies, some jazz projects and of course my solo career. I wish the guys in Genesis all the very best in their future. We remain the best of friends.”

However, in 2017, he decided to reunite with the band. Last year, they announced a world tour, The Last Domino, but had to put it on hold because of the pandemic.

And as fans were looking forward to seeing the group on stage together, Collins gave an interview with BBC Breakfast which made many concerned about his health. He and his band mates announced that it will be Collins’ son Nicholas who would do the drumming and Collins will only sing.

“Nic is a great drummer, but he is capable of sounding like early Phil. For Mike and I, that was always quite exciting,” Genesis band member Tony Banks said.

“It means you can play some of the songs that you haven’t played with Phil as the drummer for a long time.”

Speaking of why he’s not getting behind the drums, the musician revealed: “I’d love to but you know, I mean, I can barely hold a stick with this hand. So there are certain physical things that get in the way.

“I’m kind of physically challenged a bit which is very frustrating because I’d love to be playing up there with my son,” adding that he doesn’t know if he wants to be touring any longer.

“We’re all men of our age, and I think to some extent, I think it probably is putting it to bed,” he said. “I think yeah, I think just generally for me, I don’t know if I want to go out on the road anymore.”

During the past few years, Collins experienced certain health issues which left him struggling to get on his feet. Speaking to Billboard, he revealed that after a surgery in 2009, he was left with dislocated vertebra, nerve damage. He had also suffered a foot fracture that left him feeling like he’s walking “on sticks.”

Previous Sad news about Brad Pitt. The announcement was made by the great actor himself:
Next Steve Harvey is caught cheating with Shannade Clermont