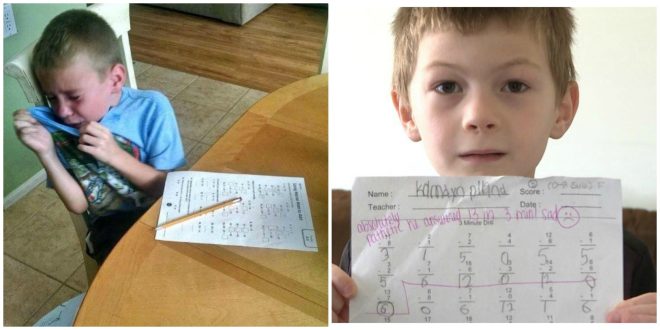 Teachers are not always given the amount of praise they deserve for everything they do for the children. Being one is a privilege, although not everyone who is involved in the educational processes is able to inspire little minds to achieve the best of their abilities.

Kamdyn Piland is a 7-year-old boy who was sort of shamed by his teacher for not performing well on the math test.

Namely, she has written on his paper that “he answered 13 in 3 minutes” which she found “sad” and “absolutely pathetic.” Yes, these words are exactly what she put down on Kamdyn’s paper along with a sad face.

When his father Chris saw the test, he was outraged. He couldn’t possibly understand how those words would encourage his son to be better the next time. Reading that his work was described as pathetic only affected the boy’s self-confidence in a negative way. When Chris confronted the teacher in question, all she had to say was, “I’m sorry you feel this way.”

As neither the teacher nor the school believed injustice towards Kamdyn had been done, Chris took to Facebook to share his son’s test, writing, “My son Kamdyn’s teacher has been so rude to him and myself all year he comes home with this and I am beyond frustrated that someone would write this on a child’s work such great motivation.”

Speaking to Fox56 News, sweet Kamdyn said, “She made me really sad and upset. I was really mad. And (it was) really mean to do.”

People were shocked to see how the teacher discouraged Kamdyn so they started a petition asking for her to be fired from the job. It has been signed by over 20,000 people. Others, however, say that although they don’t approve of what she did, losing her job over the test comment was a bit much.

Since the incident took place, Chris decided to take Kamdyn out of her class and didn’t know how and if the school had done something regarding the issue.

“Maybe it’ll be taken seriously now and it’ll keep it from happening to other teachers and other students,” Chris Fox56 News.

We are convinced that with the right amount of support and encouragement by Kamdyn’s new teacher, he will thrive and will get better and better with each passing day.

What are your thoughts on this story? How would you react if your kid’s teacher did something like this? Tell us in the comment section below.