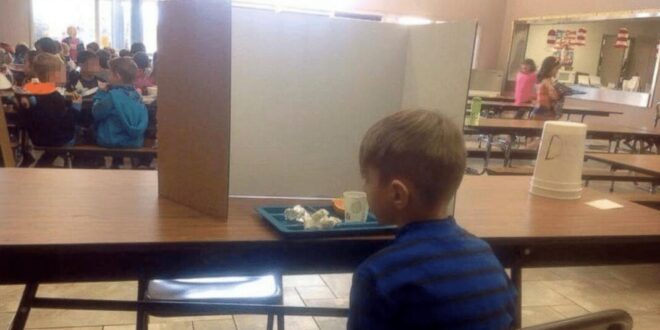 Unexpected turn of events sometimes results in very unpleasant consequences. Even if these kinds of things are not due to our fault, we are put in a position to fight against them and endure the pressure of the circumstances. This was something that Nicole Garloff and her son Hunter Cmelo had to struggle with.

The six-year old boy was a student at the Lincoln Elementary School in Grants Pass, Oregon. He had been put in a bad situation where he was punished and shamed in front of the class for things he was responsible for. His mother, as usual, drives the boy to school, but one day her car just stopped working. This resulted with Hunter being late for school. He was late just few minutes.

Hunter knew that this will result with detention and he started crying. Neither he nor his mother were guilty for this situation, but it was up to them to face up with the consequences. The boy entered his classroom, but Nicole felt uneasy. During lunchtime she decide to check on her son in order to see if he is fine.

What she saw stunned her. Her son was separated from the rest of the students as a punishment. However, the punishment didn’t end there. He sat behind a white partition, unable to see the other kids and classmates. In addition, he had a cup with the letter ‘D’ next to him, which means ‘detention’.