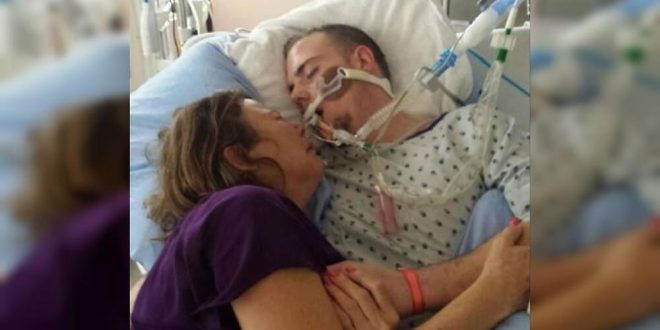 One devastated mother who lost her son in a tragic manner is warning everyone of the dangers of opoid abuse.

In a touching Facebook post, Sherri Kent explained that her 22-year-old son Michael overdosed on prescription painkillers. He took a fatal dose of the drug fentanyl, which is around 50 to 100 times stronger than morphine.

“I just want everyone to know that my son Michael overdosed on fentanyl,” this heartbroken mother wrote. “My son was not an addict he made a mistake that cost him his life.”

Along with the warning, Sherri shared a photo of Michael in his hospital bed, intubated and probably unconscious, while she is holding him in her arms.

Michael Kent passed away on March 21.

According to his mom, Michael and his sister were running errands when they stumbled upon an unknown man who offered them drugs, as per CBC. This happened a day before the tragedy struck. Michael sister told him not to take the pills, but he met with the man the following day. He bought the drugs and took them inside the store’s bathroom, where he overdosed.

“By the time the ambulance got there he was in cardiac arrest,” Sherri told CBC.

Michael was rushed to the hospital where he later died.

“Believe me, it was the worst days of my life,” Sherri said.

According to the Huffington Post, “deaths due to opioid overdoses have risen sharply in the past few years, partly due to a particularly potent drug called fentanyl. Fentanyl is between 50 and 100 times more powerful than another opioid, morphine, and its use seems to be on the rise in the U.S.”

Fentanyl overdoses in Canada, particularly in the area where Michael resided, are also on the rise, CBC reports.

“I just want to make everyone aware of the epidemic that’s goin (sic) on right now that’s killing 5-7 people a day in every city in Canada,” Sherri wrote. “It’s out of control and there is no way to protect our children from this other than to warn them of the dangers of drug use today.”

“They made me a spot on the bed where I could lay with my son and talk to him,” the mother said. “This is where I told him I was still proud of him.”

Sherri’s touching and heartbreaking post went viral. People offered their condolences and prayers, and she is glad it reached to thousands of people because it means she helped raise awareness.

We are very sorry for this mother’s loss and we thank her for sharing her son’s story because it can prevent at least a few overdoses of this dangerous drug.

Previous Here’s how Amber Rachdi managed to lose over 260 pounds at “My 600-lb Life” PREVIOUS
Next Patrick Hardison received a new face after third-degree burns, this is him today