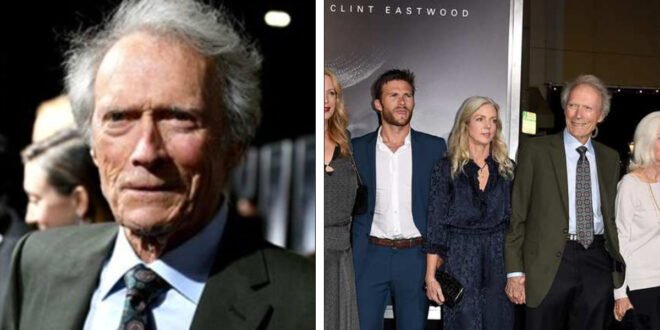 Clint Eastwood is one of the most prominent Hollywood actors who has been under the spotlight ever since he first appeared on the screen. His contribution to the film industry is enormous and most of his performances are until this day considered iconic. Over the course of his career, Eastwood won a number of awards, including four Academy Awards (out of 11 nominations), and four Golden Globes (out of 13 nominations). Some of his most legendary roles are those in Dirty Harry, American Sniper, and Million Dollar Baby.

Eastwood has eight children with six different women, but it was only in the premiere of his movie The Mule in 2018 that he appeared with all of them.

Besides being famous for his incredible acting talent, Eastwood is also known as a womanizer.

According to some tabloids, it was back in 1953 when the actor had a brief affair with a Seattle woman while engaged to Margaret Johnson, a young U.C. Berkley student. The woman got pregnant but since she and Eastwood put a stop to their affair, she decided to give her baby daughter for adoption. The baby, who was named Laurie by her adoptive parents, grew up and became curious about her origin. She wanted to learn who her biological parents were and that led her to the famous actor.

After 34 years, Eastwood learned he had another daughter. He and Laurie have been very close since the moment they learned of one another. He even invited her to the 2004 Oscars with him where she was spotted holding Eastwood’s mother Ruth Wood arm-in-arm. No one really knows why, but it wasn’t until 2018 that Laurie caught the attention of the tabloids and magazines.

One of the actor’s friends told the Daily Mail: “We always wondered why it was never really widely known or widely acknowledged before. He took Laurie to the Oscars around the time that he was nominated for Mystic River with his mom and Dina.”

Eastwood had many relationships with many women, a lot of which overlapped.

He was married two times and for most of his girlfriends he would say they were the love of his life at the time, but none of his marriages and relationships lasted very long. Currently, the 90-year-old actor is dating Christina Sandera who is 34 years his junior. He says he’s happiest he’s ever been.