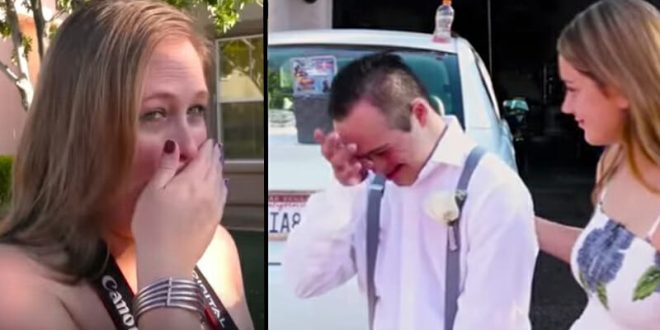 Finding a date for a homecoming dance is a high priority for any 17-year-old, so it can be a tough blow to one’s self-confidence if no one agrees to go with them.

Daniel Rivas, a 17-year-old Arizona boy with Down syndrome, is just like all other kids his age, with the same dreams and desires of most teens.

One day he hopes go to college and become a chef. But, until then, he wants to enjoy his high school functions, and that included attending his homecoming dance with a date.

Sadly, Daniel was turned down by every girl he asked.

Seventeen-year-old Daniel Rivas was excited to attend his high school’s homecoming dance. His mom Tonya Rivas was also excited for her son.

There was only one problem, however. He didn’t have a date.

After asking several girls and being turned down each and every time, word of Daniel’s dilemma got back to 10th grader Kylie Fronius.

When Kylie heard Daniel needed a date, she immediately stepped up and wanted to surprise her classmate.

So, she asked Daniel to be her date one day at school. Of course, Daniel was delighted by Kylie’s homecoming proposal.

“Someone took the time to take my son to homecoming,” said Tonya Rivas, Daniel’s mother, as her voice cracked with emotion.

Daniel’s mother Tonya was touched and flabbergasted by the girl’s kindness.

“It’s not that Daniel has a disability. It’s Kylie didn’t see any disability. That is what your heart wants as a mom.”

Still, this unexpected surprise was just the beginning for the young boy. After Kylie’s sweet proposal hit social media, it drew the attention of the local news.

When Fox5 News caught wind of the story, they featured the teens in a broadcast that won over thousands of hearts.

“I hope I can make his night fun.”

What the teens didn’t know, however, was that the station was also planning a giant surprise.

Fox 5’s Surprise Squad, which is known for acknowledge people who do good things in the community by rewarding them with big surprises, decided the positive attention Kylie and Daniel had received wasn’t enough.

Impressed with Kylie’s compassion, they wanted to go big. And when the Suprise Squad goes big, they go big…

On the night of their homecoming dance, Kylie and Daniel were greeted by Monica Jackson, host of the Suprise Squad.

It all began with a Rolls Royce rolling up to take the pair on their date.

After the luxury ride picked up the high schoolers, they were whisked off for a dinner at Bistro 57, a high-class, local bistro.

Kylie and Daniel then continued to receive the red carpet treatment.

The emotional night included a lot of crying, but they were tears of joy as the surprises kept coming.

Suddenly the event was interrupted.

The Surprise Squad finished off the evening by ensuring more memories would be made, letting everyone know they were sending Kylie, Daniel, and their families to Disneyland.

To make sure the rest of Daniel’s dreams continued coming true, he was aslo given a $10,000 scholarship from United Nissan in Las Vegas.

After that, they surprised Kylie with a brand new car.

“All you had to do was watch the (original) news story that aired, and you saw a young lady with a huge heart, and she was inspirational,” said Don Forman, the owner of United Nissan, revealing his motivation for making both Kylie and Daniel’s dreams come true.

It often takes just one simple yet kind gesture to create a snowball effect as others become motivated and inspired to also be generous and kind.

Kylie Fronius didn’t ask Daniel Rivas to homecoming to be rewarded or noticed, but good deeds tend to have that result.

It doesn’t cost us anything to spread a little love, and the result is priceless, both for the person receiving it and the one showing it. People like Kylie and Daniel show that the world is heading in the right direction.

This is exactly how we as a society should act not only in the private sector but in the media as well. Highlighting the good in people instead of the bad!

Kylie has more class, moral fiber, and integrity than many adults, God bless her heart!

If you loved watching this beautiful video just as I did, don’t forget to SHARE it with your friends and family on Facebook.

Previous Chuck Norris gave up his entire career to care for his sick wife – he will always call her his ‘best friend’
Next Everyone is wondering what he saw in her. This lady is married to one of the most beautiful actors in the world