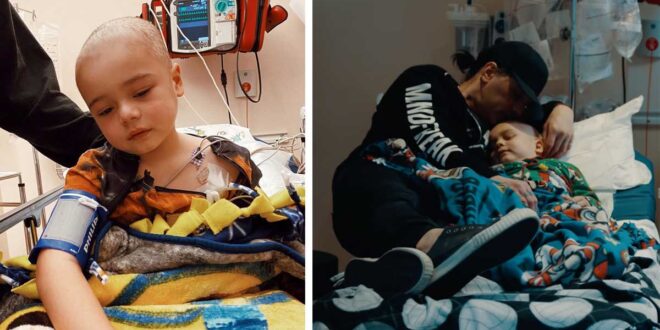 Cancer is such a severe disease. One day you have someone with you, the next day, that same person turns into another once they find out that they will be fighting one of the deadliest diseases out there. Criss Angel’s 7-year-old son has cancer – Leukemia, to be more exact, and he was diagnosed with it back in 2015.

Finally, after six years, Johnny Crisstopher is in remission. The famous illusionist took it to Twitter to celebrate his son’s remission.

“TODAY OUR SON JOHNNY CRISSTOPHER WILL FINALLY RING THE BELL SYMBOLIZING HIS REMISSION AND THE END OF HIS TREATMENT!” he wrote on a post on the platform.

Criss Angel also took his story on YouTube and shared a mini-movie of his son’s battle against the severe disease.

Back in 2015, when Johnny was only 2-years old, Criss found out that his son was suffering from this disease, and as he puts it, he felt helpless at the time.

He and his wife were split up at the time, and Shaunyl, his wife, moved to Australia at that point in time.

Then, Angel’s career was flourishing, and he was booked for 10 weekly shows at the Luxor in Las Vegas. But as the illusionist puts it, there was nothing more important than to be with his son. So, he flew to Australia to be with him.

But, because of the commitments he had in his career, he could only see his son two more times in the time span of the next couple of months.

“Johnny is a happy, fun, loving boy, but the steroid treatments have a profound effect on his mood,” stated Angel. “That’s hard to see, but that’s not our Johnny. That’s the steroids.”

After the first treatment for acute lymphoblastic leukemia was done, Angel’s son went into remission. Albeit a brief one, because in 2019, Criss Angel shared with his followers that his son’s disease had returned.

“Johnny Crisstopher — he got diagnosed with pediatric cancer before he was 2 years old — he’s been in treatment for over three years. He’s been in remission,” said Criss in an interview, “but unfortunately … he had a relapse, and he’s going back into the hospital on Monday.”

But this time, Criss and his wife were prepared. They knew that this day might come, and they prepared for it. In January 2020, a clip of Criss Angel cutting his son’s hair because it started falling off due to chemotherapy was posted by Benson.

“This time around, we know what to expect. Even though it’s harder than the first time, we know that it’s all part of the battle, and even without it, his face is still the most handsome face I’ve ever laid eyes on. One day at a time, my love, and before you know it, cancer will only be a small part of your story. The rest is yet to come.”

Only two years after this video, they’re finally celebrating their son’s victory over the disease.

They celebrated this important moment in their lives by going to Build-A-Bear and letting Johnny build his stuffed animal, something the kid says he has always wanted to do!

“This journey has been tough, but it’s only a small chapter in your story, my Johnny and I can’t wait to see you share your love and courage with the world! Here’s to being cancer-free forever and ever,” said Benson.

Share this story on your social media as a message for anyone who’s going through tough times battling with this killer disease, as well as a motivational message that they should never stop fighting, even when times seem dark. There’s always light at the end of the tunnel!

Previous Life with Dr. Phil described by his ex-wife
Next Goldie Hawn opens up about her depression in her young days and says she ‘couldn’t go outside in public’