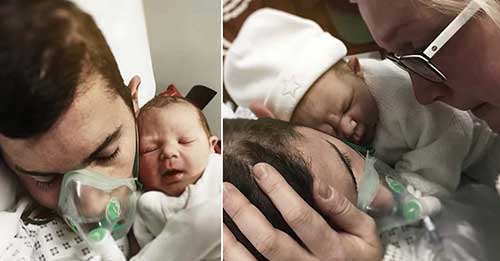 The most painful sight is seeing your loved one fight for his/her lives. No one can stop death. But in the final moments you wish to cherish every moment with your loved ones.

A brain tumor patient Brett who kept himself alive just long enough to meet his third baby. Brett and Nicola started as friends, became best friends and realised there was more than just being best friends. They happily got married to each other and became parents to two gorgeous daughters.

Nicola expressed that it made her happy seeing Brett as a wonderful dad. However things suddenly changed due to his health. Changes in his behaviour was observed by Nicola much earlier however only in 2015 they got a devastating diagnosis that Brett had a brain tumor.

She recollected the neurologist informing them that the surgery could end by either removal of tumor or death. Fortunately they took out the tumor as much as they could. Nicola was pregnant the third time when the tumor again grew back. This time it was more threatening and could not be treated.

Three months later Brett at home had a seizure and was immediately taken to Milton Keynes at the same time Nicola was in labor with her third baby at Luton hospital. After the birth of their child Arya, Nicola only wanted to fulfil Brett’s wish- to hold his newborn.

With a co-operative and understanding staff she made it in time to go to the hospital he was in. She felt it was a race against time. In her words “I knew what was going to happen and I wanted him to know that it was ok… I told him it’s ok, don’t hurt yourself anymore.”

Nicola gently placed the little baby Arya on Brett since it could be the first and the final moment the father would be able to meet the little angel. Spending a few hours together, he died knowing he was with her. She was born at 5:07am and three hours later, he passed away at 8:25am.

His older two daughters think that their dad who they address as “superhero handsome prince” sends them feathers letting them know he is looking after them.

Watch this emotional heart breaking video and do share this beautiful and sorrowful story.