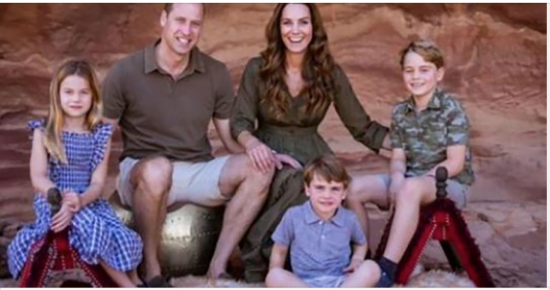 Prince William and Kate released their family picture just in time for Christmas.

However their Christmas photo seems to be attracting a lot of attention. Social media users were quick to comment of their 6-year-old daughter Princess Charlotte.

Scroll down to find out exactly why…..

The royal couple shared a family picture which was taken during a private family trip to Jordan, according to Kensington Palace.

“Delighted to share a new image of the family, which features on this year’s Christmas card 🎄,” the couple wrote on Instagram on Friday alongside the new photo. 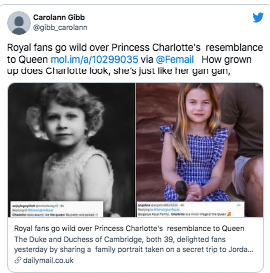 Two million people reacted to the picture noting how grown up the children look. People pointed out the similarity between Princess Charlotte and her great grandmother the Queen.

Then an image of her alongside the Queen as a child twas used to compare how like her great grandmother she is.

It only seems like yesterday that she was started school. 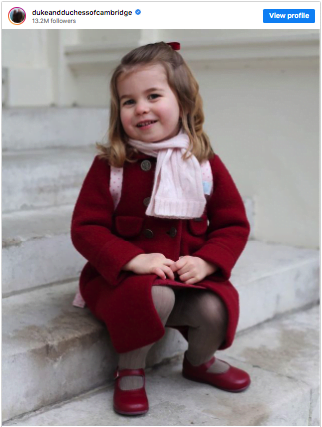 Despite both looking alike, the two royals’ lives are very different since Elizabeth stayed home to receive her education while Princess Charlotte is attending Thomas’s Battersea, an independent mixed school in London.

Charlotte gets to mix with boys and girls learning all the core subjects as well as art, ballet, drama, French, and music.

The focus was particularly aimed at the adorable outfits that Charlotte was dressed in. 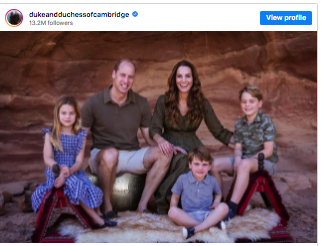 While Kate is noted for her impeccable dress sense, always looking stylish, without being extravagant and melds the two perfectly with outfits that are befitting of a future queen.

Bethan Holt, author of a book regarding Kate’s style, said Kate was a trendsetter “loved by the nation, with an unquestionable influence on how people dress, style their hair and the places they visit,”

This now extends to the royal children with particular kudos given to fact their parents are happy to recycle their children’s clothes and dress them in hand-me-downs.

Prince Louis wore the same outfit that Harry during his first Trooping the Colour event back when he was the same age as Louis. 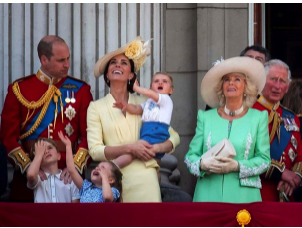 There have been times when Prince George was pictured wearing some of his father Prince William’s clothing from his childhood while Princess Charlotte wore her older brother’s shows in one of her birthday portraits.

The dress from Mango that Charlotte wore in this year’s Christmas photo is now sold out due to its high demand.

Charlotte’s parents have been praised for the choice of clothing they choose, especially for Charlotte, who wears clothes suitable for her age.

It was noted how refreshing it was to see Charlotte dressed as a child in a picture of her celebrating her second birthday. 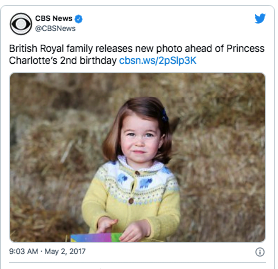 “Is it possible that in treating children like children — both in the way we dress them and the activities we allow them to pursue — we will better prepare them for a natural, responsible transition to adulthood some day in the future?” Holmquist said.

Kate and William’s chose Jordan for a family holiday as Kate lived there for two years when she was younger while her father worked for British Airways. In 2018 William also visited Jordan as part of his tour of the Middle East. 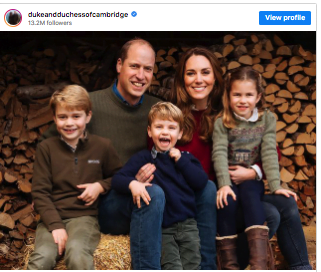 The Duke and Duchess are delighted to share a new image of their family, which features on their Christmas card this year🎄.

In 2019 their royal Christmas card featured an image of them at the family’s country residence in Norfolk, Anmer Hall, the family posed in their comfy jumpers while sitting on haystacks.

The previous year the couple chose another casual look while enjoying the outdoors again at their country home.

The Duke and Duchess of Cambridge are delighted to share a new photograph of their family.

This photograph taken at Anmer Hall eatures on Their Royal Highnesses’ Christmas card this year.

I love that the duke and duchess chose an image from their private family vacation for this year’s Christmas card.