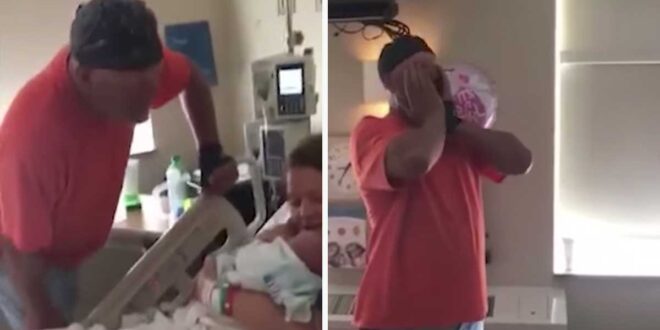 What would really make an awesome present for Grandad this year…? Well, this sort of present really can’t be planned, grandpa James Keleman finds out!

Carie Elbe, from Breese Illinois, with her little newborn baby Landry, loved by all the family, mom, daddy, and of course 4-year-old sister, shared a wonderful video on Facebook.

Grandpa, James Keleman, father of Carie, was especially pleased after visiting his new grandchild in the hospital, Carie explained in her video.

Just to say that it wasn’t just because Landry was born on his granddaddy’s birthday, he also had his grandad’s name, Landry James!

But, it wasn’t even just that, there was more to it than that, simply, and also that Landry was a boy, it was this that really sparked grandad’s excitement!

Grandad had been surrounded by females in his life and even from a young age he remembers that he was the only boy of three, and had four daughters, and two granddaughters.

Until Landry was born everyone but grandpa knew the baby was a boy, but for a special reveal, all the family kept the secret from him.

Carie’s daughter didn’t reveal anything either. It was hard keeping the truth a secret, but everyone managed to do it!

This was what was written on the baby’s onesie, FYI: I’m a boy!

When grandad James saw it he was in shock, a happy shock, he couldn’t believe how well his daughter had hidden the secret from him for nine months.

“No way”…he said in the video, chuckling and calling the family “brats.”

“I just can’t believe we managed to pull it off”

Although her father was grateful to just be a papa again, the big news made him even happier.

“So…I’m all stoked about having another Granddaughter on my birthday…only to find out that everyone in the world kept it a secret about my first Grandson!”