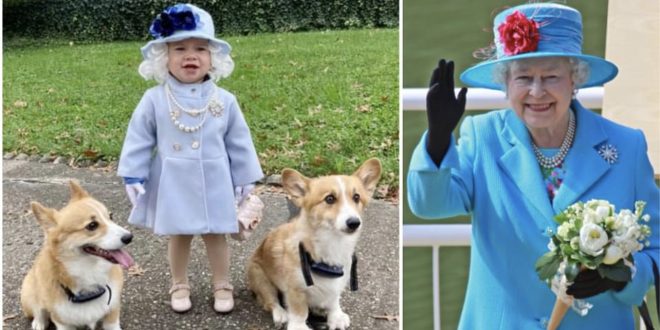 Two-year-old girl dressed up as Queen Elizabeth, and got a thank you letter from Buckingham Palace

After Queen Elizabeth II died last week, people around the world have been mourning her and looking back on her historic life.

One adorable story from last year is a reminder of the impact she had on people of all ages, and the power she had to create unforgettable memories.

Every Halloween, lots of people come up with funny and creative costumes — but how many can be called “fit for a queen”?

Last year, one American tot’s spot-on Halloween costume warmed hearts all over the world — and recently, it even got the attention of the Queen of England.

Jalayne Sutherland, a two-year-old from Florence, Kentucky, did Halloween in style last year: the toddler dressed up as Queen Elizabeth II, and completely nailed the part:

While Jalayne and Elizabeth are about a century apart in age, the girl completely pulls off the historic queen’s signature look.

The toddler sported a white wig, some pearls and the type of coat and hat outfit that Elizabeth can often be seen wearing: 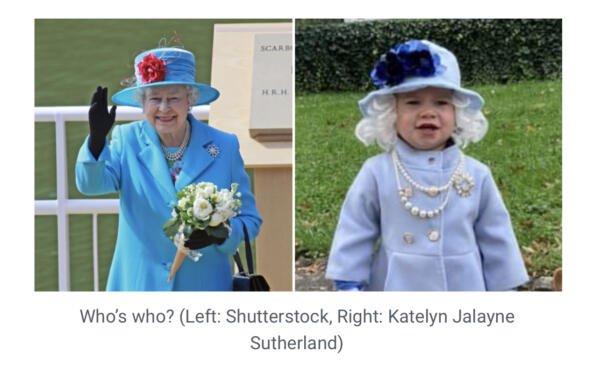 One big thing the royal and her young lookalike have in common: they both love their pet Corgis.

The Queen is famous for her lifelong love of the dog breed: she’s had Corgis going all the way back to the 1930s, and they’ve always been a source of great comfort and joy to her.

Jalayne is also the proud owner of two Corgi dogs, who tagged alongside her on Halloween to help her complete the look.

“When it comes to corgis, the Queen always comes to mind,” Jalayne mother Katelyn Sutherland told WLWT. “So what better way to show their friendship and the bond they share.”

Katelyn posted the adorable costume photos on social media. They went over so well that she was encouraged to send them to Buckingham Palace.

To her amazement, she heard back a few weeks later — a letter straight from the Queen’s own office.

The letter was written and signed by Hon. Dame Mary Anne Morrison, the Queen’s longtime lady-in-waiting, who often handles her official correspondence.

The Queen wishes me to write and thank you for your letter, and for the photograph you thoughtfully enclosed.

Her Majesty thought it kind of you to write to her, and The Queen was pleased to see the photograph of your daughter, Jalayne, in her splendid outfit.

Her Majesty hopes you all have a Merry Christmas, and I am enclosing a little information about the Royal Pets, which Jalayne might like to have. 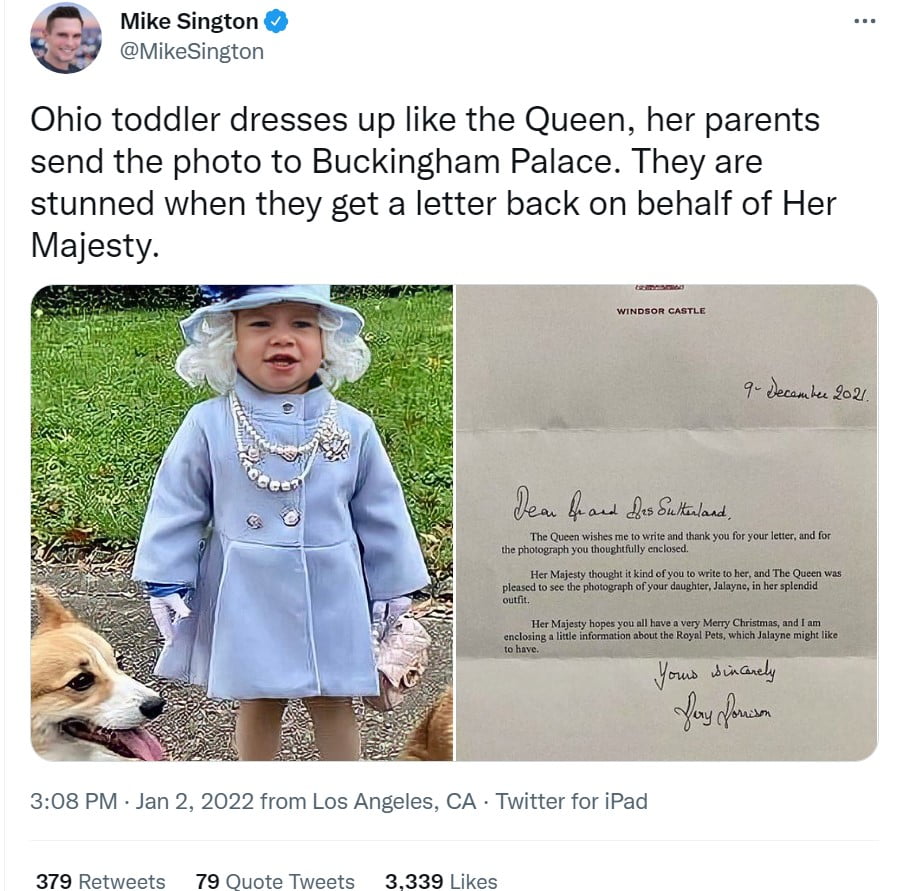 The Sutherland family was stunned to receive a response, and said they were “grateful” for the thoughtful letter.

“This is something that we’ll cherish for the rest of our lives,” Katelyn told WLWT.

2021 had been a particularly difficult year for Queen Elizabeth, after she suffered the loss of her husband of over 70 years Prince Philip back in April. She also began stepping back from her official duties due to health issues.

Given all that was going through, it’s not hard to imagine she was delighted by the sight of the adorable 2-year-old dressed up as her.

What an adorable costume — how amazing to get a letter from Buckingham Palace and the Queen herself! This is definitely one letter this 2-year-old will cherish for life.

It’s heartwarming that the Queen found such joy in this little girl’s sweet costume and went out of her way to have a letter sent.

Share this heartwarming story in memory of Queen Elizabeth II.

Previous Queen’s farewell message to her grandson is bittersweet. On his birthday, Prince Harry officially disclosed
Next Man arrested for running up towards Queen’s coffin in UK