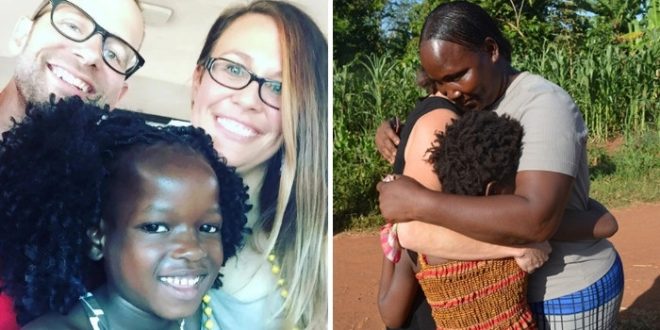 A loving family is a wonderful thing, but to have that and then look to adopt really is a gift. Jessica Davis and her husband Adam had a loving family of six, with four children but they have the gift of love and healing they opened their home to adopt another child.

They could really make a difference for another child, giving them a loving home, a home to a child that otherwise lived in a world of disarray, unharmonious an unloved.

about a world… “inundated with loss, hardship, and a vast array of obstacles”

bringing… “goodness, peace, or healing to (the) world”

The Davies family took the decision very seriously, they knew they would be taking on a lot of work for many, many years to come, not just financially but emotionally too. They had done their homework and they wanted to do it!

They had been reading about Uganda and the high need there for parents to adopt children, with 3 million orphans! So they decided that was the way they would go.

The little girl was called Namata, from Uganda, they called her Mata for short, it was definitely going to be a really difficult thing to do an official and ethical adoption!

There wasn’t a single thing that was easy about the adoption at all, it was a long difficult and stressful process just to bring the little girl home with them. She was just six years old and they kept in mind the wonderful thing they were doing.

It was 2015 when Namate did actually join the family…

Jessica shared online that nothing at all could prepare her for what was about to follow!

The sweet and clever girl learned English quite quickly, once she was able to express herself she started to tell everyone for the first time about her life and her home. It was very different from what they expected!

The Davies family were told that she was an orphan, no father, and a neglectful mother, that she was taken to a local orphanage it was so bad.

They had been told that she had been abused and abandoned, never been to school and hardly given any food, The Davies family remembered the horrific picture that was painted for their benefit!

It broke Jessica’s heart to imagine Namata’s suffering and hardship she had to deal with before she came to them.

The family flew to Uganda in 2015, to see Namata, and visited her at the ‘God’s Mercy Orphanage’, where they saw this little girl in an empty room with no toys at all and bars on the walls!

When she started speaking in English she started to say that her mother was a really good mother, that she loved her and took her to school every day.

The couple re-read all their paperwork carefully to try to look for clues, things were starting not to add up in the least bit.

“Everything … she unraveled to be a lie …the child we had struggled for years to adopt was not an orphan at all.”

Everything they thought was true, the trust they had in the things they were told, it all turned out to be lies, they felt so betrayed.

Adam said to the news channel:

“The only trauma this child ever experienced was because we essentially placed an order for a child. She was home and happy with her mother until they selected her for us.”

Namata’s mother believed that her daughter was being sent to school abroad, she had been told that she had a great opportunity to give her daughter a great education, she didn’t know she was signing away her rights as a mother…

The Davies family were really horrified at what had been done, a young girl was taken away from a loving family, they worked to arrange a reunion between Namata and her mother, they set-up a facetime call.

When Namata was told she could speak to her mother again she was so happy, she was giddy and full of giggles!

“I get to talk to my mother again!”

Namat’s mother told them how she had been tricked into signing over her daughter, she said she was told the Davies were sponsoring her daughter to have her education in America for a year or two only.

Keren Riley, an advocate who works on projects to reunite Ugandan children with their lost families, told the news channel that there are several organizations, all of which look to deceive families like this for profit, looking for single mothers to exploit and con them, families with more children than they can afford.

“It’s easy to pull the wool over their eyes”

They approach mothers at a local village, in the church, to tell them about opportunities for wonderful education for their children. They had to sign permission forms and they also falsified documents when they needed to.

All so that the children would be adopted by families who would pay out thousands upon thousands of dollars to fly these children overseas.

Jessica said to the news:

“I don’t want to see another mother go through this…”

According to the new group CNN, these children are sold to unsuspecting families for around $15,000.

The couple worked with a group called ‘European Adoption Consultants’ – (EAC), they are now under investigation in conjunction with the FBI and the State Department.

The Davies family realize they were fooled, but it is not completely clear if the EAC played a part in the child trafficking scheme or if they were themselves scammed by the Ugandan orphanages.

Since about 1990 the agency has placed over 2,000 overseas children in US homes, they have since been closed down!

They closed them down due to not ensuring that its foreign providers did not engage in the “sale, abduction, exploitation or trafficking of children.”

No matter which way you look at the agency, in some way at the very least they were at fault with the strict laws they must follow.

Stacy Wells, from Virginia West, also had dealings with the EAC, they had a girl called Violah who had been completely abandoned by her parents, so they said!

“That after the dad died, [EAC] told us that [the mother] didn’t feed them, that they were found sick, dying basically”

She really felt for this little girl, her suffering reached out to her heart, the wells brought her home to their house from Uganda.

When Violah too learned English, the stories she told were vastly different from what the family was told about her, she had a mother and sisters who loved her!

The family were horrified to learn the truth, Wells went back to Uganda with Violah so she could reunite the family she was broken apart by the untruths of the agency!

“It was very hard—I realized at that moment, she felt like my daughter, and she still does,” Wells said. “But I knew, that she was where she was meant to be.”

Many other stories though didn’t have such a great ending, there are plenty of children who were adopted and not returned.

There are well over one million families in the USA that look to adopt each year, and a few unscrupulous organizations like the ones here have used this fact to take advantage of vulnerable families in third world countries like Uganda.

You can learn all about adoption laws in the US State Department.

Watch the story below, and please SHARE with your friends and family